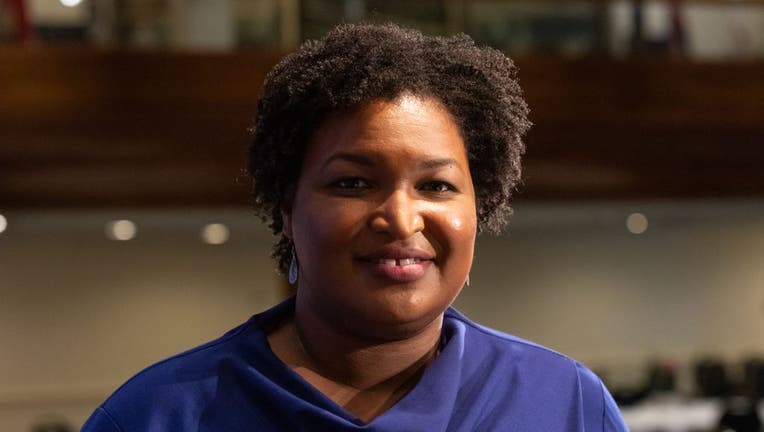 Stacey Abrams poses for a picture, after her speech at the National Press Club Headliners Luncheon in Washington, D.C. (Cheriss May/NurPhoto via Getty Images)

ATLANTA - Stacey Abrams says she and her organization Fair Fight have raised millions since Friday to help Democrats in their attempt to win Georgia's two Senate runoff elections.

The one-time candidate for Georgia governor tweeted Monday morning that her group has raised $6 million so far for the campaigns of Democratic challengers Jon Ossoff and the Rev. Raphael Warnock.

The stakes are high for a momentous political struggle in Georgia during President Donald Trump’s final days in office. The state is closely divided, with Democrats making gains on Republicans, fueled by a surge of new voters. But no Democrat has been elected senator in some 20 years. As much as $500 million could be spent on the two races, one strategist predicted.

Both of Georgia's Senate seats in the state are now held by Republican incumbents David Perdue and Kelly Loeffler. They were forced into the January runoff contests after no candidate reached the 50% threshold needed to win outright in multi-candidate races.

“Now more than ever, we NEED to keep the Senate in Republican hands,” tweeted Loeffler. She said Saturday that she and Perdue are “the last line of defense against the radical left.”

With a Democratic majority in the Senate, the party that also controls the House would have a firm grasp on power in Washington. Biden would have latitude over nominees, including for his Cabinet, and a chance to push major portions of his legislative agenda through Congress. If Democrats fall short, Senate Majority Leader Mitch McConnell, a Kentucky Republican, could wield the power to check Biden’s ambitions.

“The Senate is the last line of defense,” tweeted the National Republican Senatorial Committee as soon as the presidential race was called for Biden. It was a fundraising appeal.

The runoff is scheduled for January 5 and will likely determine which party controls the U.S. Senate.

The GOP’s advantage has slowly eroded as Atlanta and its surrounding suburbs experience explosive population growth.

“Georgia has had the potential for years,” she said in an interview shortly before the election. “It didn’t just start this cycle. This has been work that’s been ongoing for nearly a decade, and I’m just proud to see it come to fruition and for it to finally receive the level of investment it deserves.”

That success is fueling speculation about her future prospects. Some of her cheerleaders envision her as Democratic National Committee chairwoman or taking a prominent post in the Biden administration. Those close to Abrams suggest her likeliest next move is a rematch with Republican Gov. Brian Kemp in 2022.

Biden had been mum on the Senate balance as he awaited the results in his own election, but he offered a preview before Tuesday’s election.

“I can’t tell you how important it is that we flip the United States Senate. There’s no state more consequential than Georgia in that fight,” he declared at an Atlanta rally on Oct. 27, when he campaigned alongside Ossoff and Warnock.