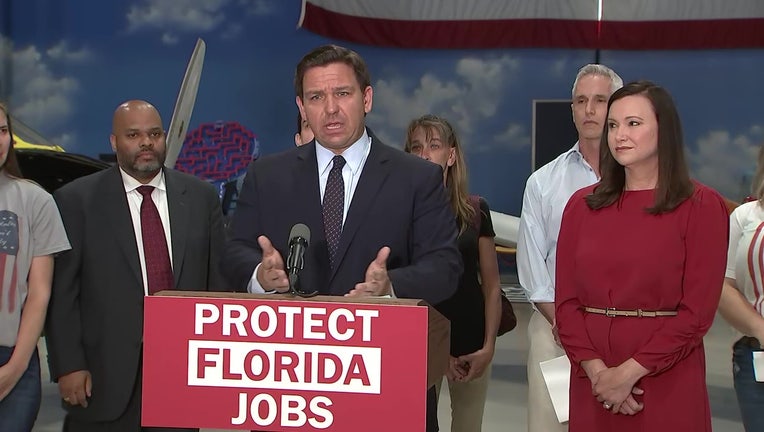 TALLAHASSEE - Gov. Ron DeSantis on Friday directed lawmakers to return to Tallahassee on Nov. 15 for a special session to push back against White House attempts to require workers to be vaccinated against COVID-19.

The mid-November session, which will overlap with a week of previously scheduled legislative committee meetings, will focus on efforts to prevent schools, businesses and governmental entities from imposing vaccination mandates and other pandemic restrictions.

"In Florida, we believe that the decision whether or not to get a COVID shot is a choice based on individual circumstances, so we are litigating against the Biden Administration and will be passing legislation in this special session to protect Florida jobs and protect parents’ rights when it comes to masking and quarantines," DeSantis said in a press release announcing the dates of the special session, which is expected to wrap up by Nov. 19.

Mask mandates in schools and government-imposed vaccination requirements have become political flashpoints in Florida, with DeSantis and other Republican leaders sharply criticizing President Joe Biden’s approach to the pandemic.

In a joint statement issued after DeSantis set the dates for the session, House Speaker Chris Sprowls, R-Palm Harbor, and Senate President Wilton Simpson, R-Trilby, said they look forward to working with the governor to craft legislation against "unconstitutional, un-American, and morally reprehensible overreaches" by the federal government.

"Over the last two years, Floridians have watched the freedoms of our friends and relatives in other states get stripped away one at a time," the legislative leaders said. "We will not stand by as the Biden Administration imposes an illegal and unconstitutional nationwide vaccine mandate that robs the American people of the dignity of work."

DeSantis announced last week that he wanted lawmakers to hold a special session to address pandemic-related issues in advance of the 2022 legislative session that begins Jan. 11.

According to Friday's release, DeSantis is pushing legislation to protect "current and prospective" workers over their COVID-19 vaccination status; ensure that people who are denied employment due to their vaccination status are eligible for unemployment benefits and covered by workers’ compensation; limit school district mandates and expand the "Parents’ Bill of Rights" law approved earlier this year; and repeal a 2002 law giving the state surgeon general authority to order injections or vaccinations.

DeSantis also is requesting "sufficient" funds to investigate and take legal action against government vaccination mandates, including against the federal government. And he wants lawmakers to use the session to evaluate whether the state should "assert jurisdiction over occupational safety and health issues for government and private employees."

Mayor Demings to Gov. DeSantis" 'Bring it on'

Book, D-Plantation, noted that "absent" throughout a Florida Chamber of Commerce forum in Orlando this week "was any mention of a desire for government to regulate business owners and deny their freedom to decide what’s best for employees and customers."

Sen. Randolph Bracy, an Ocoee Democrat who is running for Congress, used social media to question the motives behind the special session.

"Every lawmaker had weekly COVID tests during (the) last legislative session. It was smart policy. It stopped the spread. And it worked. Now, Gov. Ron DeSantis triggered a special session to ban the same policy his own party supported," Bracy said in a Twitter post. "Practical policymaking or playing politics?"

DeSantis initially floated the idea of a special session on Oct. 21, saying he wanted lawmakers to do away with COVID-19 liability protections for businesses that fire employees based on vaccination requirements. The governor also said he wanted workers to have the ability to sue employers that fail to provide notice of religious and health exemptions to vaccination requirements.

At the time, Simpson and Sprowls suggested legislators could consider withdrawing the state from the federal Occupational Safety and Health Administration. That would involve establishing a state program for worker safety.

When asked for details about the upcoming special session Friday, DeSantis focused on fortifying a new state law known as the "Parents’ Bill of Rights," which spells out rights of parents to "direct the education and care of his or her minor child" and provides a right to "access and review all school records" related to their child.

"That will address making sure parents have the right, with respect to any type of medical decisions, including wearing a mask, but then also making sure that parents have a right to not have their healthy child quarantine in accordance with Florida (Department of Health) rule," DeSantis told reporters in Eustis.

DeSantis in part relied on the new law in a July 30 executive order seeking to block school mask requirements.

But Leon County Circuit Judge John Cooper ruled last month that DeSantis overstepped his legal authority in the order. As part of the ruling, Cooper said the law "does not ban school board facemask mandates" and that the state’s move to impose a ban exceeded its authority.

DeSantis said Friday that lawmakers have told him the top calls they are receiving are from parents whose children were quarantined after being in contact with someone who had COVID-19, even though the children weren’t infected.

"I do think some of the areas that did really draconian mitigation policies saw enrollment decline and saw performance decline more than anyone," the governor said.

The special session offers another platform for DeSantis, widely mentioned as a potential 2024 presidential candidate, to highlight differences between the governor and the Biden administration.

On Thursday, DeSantis and Attorney General Ashley Moody announced a federal lawsuit that challenges moves by the White House to require employees of federal contractors to provide proof of COVID-19 vaccinations by Dec. 8.

Also Thursday, DeSantis warned business leaders at the chamber event against following a "woke" ideology, which he called "very dangerous" for the country.

"I would just very, very seriously caution anybody to think, kind of getting on some of these trains is going to buy you any grace on anything," he said. "It is not going to do that. And you're much better off just kind of staying strong and doing what makes sense for everybody."

Days before DeSantis called for the special session, proposals in Texas to block vaccination mandates failed after business groups objected.