Facebook’s head of safety was questioned by senators in a hearing on its products’ effects on kids' wellbeing, following revelations in September that executives had known Instagram was harming the mental health of some children. Marc Berkman joins us.

Amid the ever-increasing utilization of digital technology over the last decade, a new study shows there may be a link between social media use and an adolescent’s mental health.

Researchers at the University of Cambridge looked at the relationship between social media and life satisfaction, and how this ultimately changes across an adolescent’s development and gender.

Data from the U.S. National Survey on Drug and Health has shown a continued rise in major depression since 2010. Meanwhile, weekly internet use hours have also dramatically increased during the same time period. 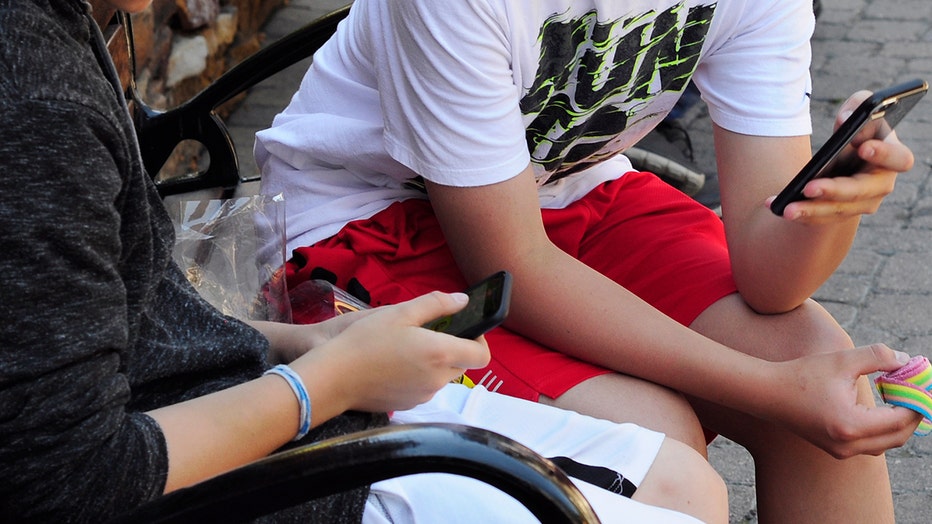 Two teenage boys use their smartphones as they sit on a bench in Vail, Colorado. (Photo by Robert Alexander/Getty Images)

"So the real question is, are these increasing and parallel due to chance, or is digitalization or the use of digital technology somehow linked to mental health and well being, especially in adolescents," Amy Orben, a lead author and researcher of the study, said during a virtual conference call on the study.

To study this, the team analyzed more than 84,000 participants between 10 to 80 years old.

The analysis, published in Nature, examined the cross-sectional relationship between self-reported estimates of social media use and life satisfaction and found the ratings most significant in adolescents.

"There is evidence of bidirectional links with social media use predicting small decreases in life satisfaction one year later," Orben continued.

Then, researchers did an additional analysis looking at the age and gender of more than 17,400 participants between the ages of 10 and 21 years old and found "distinct developmental windows of sensitivity to social media" in adolescents.

Impacts differ by age and gender

Through applying statistical models, researchers found these "windows of sensitivity" — or the apparent link between social media and life satisfaction — happen more substantially at certain ages, and this differs between gender.

In males, researchers found a significant link between the ages of 14 and 15 years old, and then again at age 19.

Meanwhile, in females, the results were slightly different, with the link appearing earlier in 11- to 13-year-olds, and then again at age 19.

The team cited puberty and earlier cognitive changes as a potential reason for the earlier sensitivity and linkage. The similarity between genders at 19 years old could be linked to moving from high school to college or starting work. Yet, they said follow-up research will be conducted to investigate further reasoning for the significance during these ages.

The study noted limitations including strong assumptions that need to be met to draw causal conclusions from the data.

While previous studies have found evidence of bidirectional links between the two subjects, the results have been inconsistent and mixed.

Some studies, including a 2020 study on digital use and adolescent development, found the correlation between adolescent mental health and social media to be very small.

But, last year, a study conducted by The Wall Street Journal found 40% of teens said their sole purpose for posting on social media is to look good to other people, while 32% of teenage girls felt that Instagram only worsened their body insecurities.

In December, Sen. Mike Lee, R-Utah, released a new study from the Joint Economic Committee on the mental health impacts of Instagram and other social media apps on teenage girls.

"Teen mental health has been declining for more than a decade, especially among girls," Lee said in a statement to Fox News. "Today, I released a report finding that time spent on social media is linked in a significant way to depression and self-harm for young women. This study merits further investigation into whether social media use is causing declining teen mental health."