A new study shows how Americans are using their retirement savings to cover costs amid the COVID-19 pandemic.

LOS ANGELES - Two months after the federal government rolled out the Paycheck Protection Program, small business owners that tapped the coronavirus aid can officially have their loans forgiven.

On Wednesday, the first round of loans distributed to small business owners hammered by the outbreak of the virus turned forgivable, a senior Small Business Administration official told FOX Business. A few applications requesting the grant money be forgiven have already been submitted, the official said.

Under the program, established at the end of March as part of the $2.2 trillion CARES Act, businesses with fewer than 500 workers can receive low-interest loans of up to $10 million. If at least 75 percent of the money goes toward maintaining payroll — including salary, health insurance, leave and severance pay — for eight weeks, the federal government will forgive it.

The remaining 25 percent can be spent on operating costs like rent and utilities, but may not go toward mortgage principal or pre-payments. Money spent on non-qualifying expenses must be repaid at an annual rate of 1 percent within two years. No payments are required during the first six months.

But small business owners have cited confusion and uncertainty around the forgiveness process. 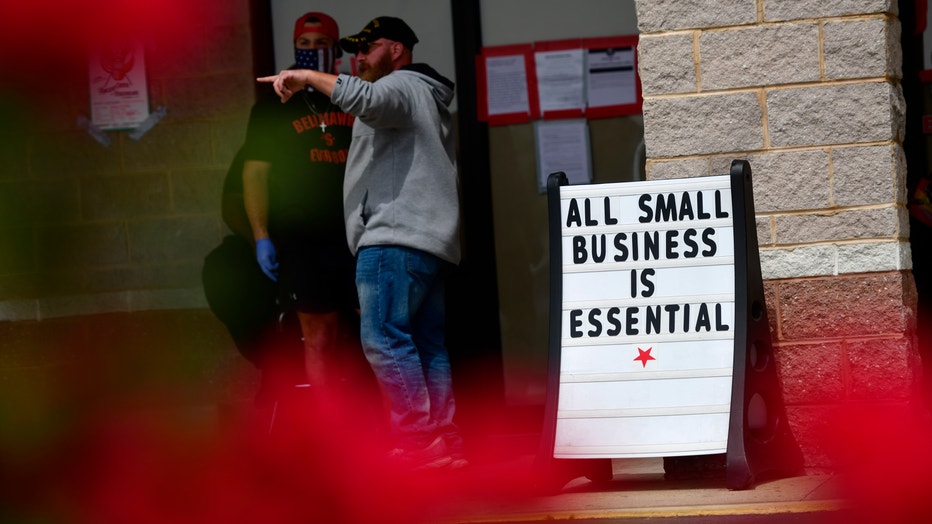 FILE - A placard states "ALL SMALL BUSINESS IS ESSENTIAL" as demonstrators, employees, and patrons gather outside the Atilis Gym on May 20, 2020 in Bellmawr, New Jersey. (Photo by Mark Makela/Getty Images)

“We hear frustration from small business owners around the complexity of the process and how hard it is to understand how to best set themselves up to get their loan forgiven,” Justin Ridgely, the senior director of finance at Fundera, told FOX Business. Ridgely said Fundera, which works with small business owners to connect them to lenders, credit card issuers and banks, spoke with thousands of owners during the PPP application process.

In order to have their loan forgiven, small business owners must fill out an 11-page application, released in mid-May, and submit it to the bank or lender that approved their initial request. The application focuses on key criteria centered around what types of expenses are forgivable. It also includes a step-by-step calculator for determining forgiveness eligibility.

“Run some calculations to make sure you don’t run into one of the two main rules that could reduce your forgiveness, and then package that up to the bank,” he said.

The IRS said the prepaid debit card will arrive in a plain envelope from Money Network Cardholder Services, which some have reportedly mistaken as junk mail.

For instance, a business that receives a $100,000 loan must use at least $75,000 on payroll costs if they want the federal government to forgive it. Payroll expenses are capped at $100,000 per employee. The loan amount is based on payroll size before coronavirus-mandated shutdowns caused a surge in layoffs, which could make it more challenging for business owners to spend three-fourths of the aid on workers.

If the borrower received a loan worth more than $2 million, it will be automatically audited by the government, Treasury Secretary Steven Mnuchin previously told FOX Business, part of an effort to prevent large, public companies from accessing the fund.

As of Saturday, more than 4.42 million loans worth close to $511 billion had been distributed through the program. Congress allocated about $610 billion to the PPP, leaving roughly $100 billion left over in the fund.

Get updates on this story at foxbusiness.com.