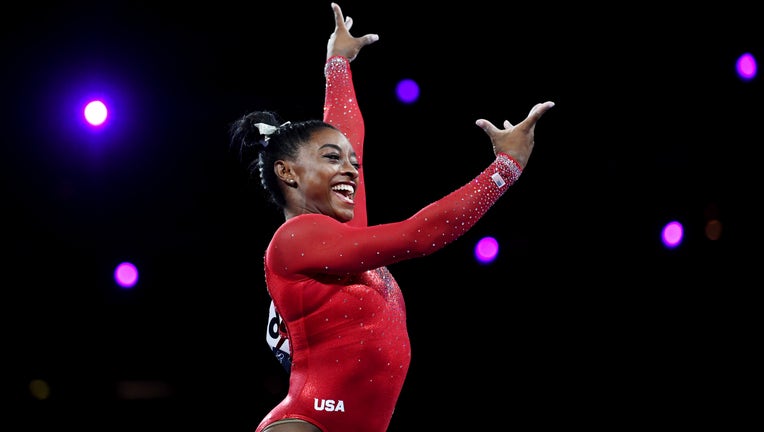 STUTTGART, GERMANY - OCTOBER 12: Simone Biles of United States reacts after her routine in Women's Vault Final in the Apparatus Finals during Day 9 of 49th FIG Artistic Gymnastics World Championships at Hanns-Martin-Schleyer-Halle on October 12, 2019

Already considered the greatest gymnast in history, Simone Biles continued her dominance as she tied the record for the most gymnastics world championships medals - following a thrilling gold performance on the vault Saturday in Germany.

Biles, 22, won her 23rd record medal at the world gymnastics championships in Stuttgart, tieing the record for most world medals by men or women set by Vitaly Scherbo of Belarus.

She also extended her own 17th world championship gold medal record with the victory.

Biles scored a combined 15.399 on her two vault runs, more than a half-point ahead of fellow American and 19-year-old Jade Carey, who won the silver medal and had edged Biles by .001 in the qualifying round.

Biles should have the medal record all to herself by the time competition ends on Sunday, as she's favored to medal in the floor exercise and the balance beam.

Earlier in the competition, Biles moved past former Russian gymnast Svetlana Khorkina for the most world medals won by a female gymnast. She also became the first woman in history to win five world all-around titles.

“I think that’s really impressive for someone to be able to do that; I guess that’s me,” Biles told The Washington Post last Tuesday “I haven’t got a chance to process it yet, but I think we’ll do some celebrating tonight for all of it — for the team, for the medal count, for the fifth year in a row.”

Biles has stated she's 99 percent sure these are her last world championships, making her performance this weekend even more meaningful.