Deputies searching for killer after finding body in burning shed

A 21-year-old man was found dead inside a shed that was found on fire nearly two weeks ago in Sanford, according to the Seminole County Sheriff's Office.

SANFORD, Fla. - A 21-year-old man was found dead inside a shed that was found on fire nearly two weeks ago in Sanford, according to the Seminole County Sheriff's Office, and authorities appear to be investigating the man's death as a homicide.

The fire happened on April 21, 2022, at a home near RoseBerry Lane and First Drive, south of State Route 415. A spokesperson for the Seminole County Fire Department confirmed that crews did respond to the fire and found someone dead, then deferred additional comment to State Fire Marshal's Office. FOX 35 has reached out.

In its partial report, the Seminole County Sheriff's Office said a neighbor reported the shed fire around 7 a.m. that day.

"I noticed flames about 10-12 feet high behind the house and I called it in immediately," said Mike Scitney, who called 911. "I didn’t really know what to expect."

Crews were actively working to extinguish the fire when they discovered a body, later identified as Jaylen McIntyre, inside.

A report notes that the back door of the home was left open, which forced authorities to conduct building clearance. The report also noted that it was considered a first-degree homicide investigation, but did not list any further details on how McIntyre died, the circumstances of his death, or if authorities are looking for anyone connected to his death. 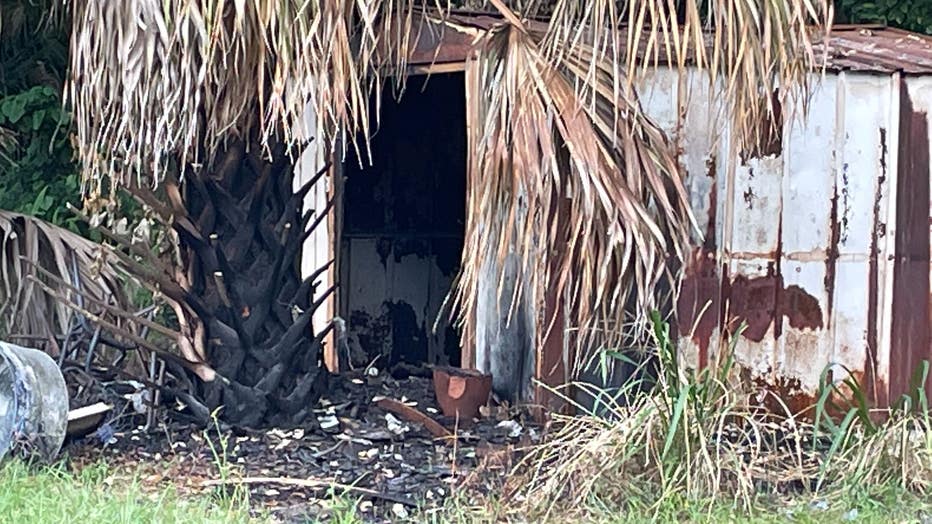 "That’s pretty unsettling," Scitney said, adding that no one has lived in the home for a couple of years.

McIntyre's sister reportedly came up to a detective as he was conducting security of the scene to report her brother missing. She told the detective that her brother was last seen around 4 a.m., wearing a black hoodie, Louis Vuitton slides, and basketball shorts. The detective told her to go back to her house and file a missing person report.

Investigators said they are now searching for the person responsible for his death.

"I hope they find them. It’s scary," Scitney said.

Mcintyre's family was too upset to talk to FOX 35 News. Anyone with information about his murder is asked to call Crimeline at 800-423-TIPS (8477).