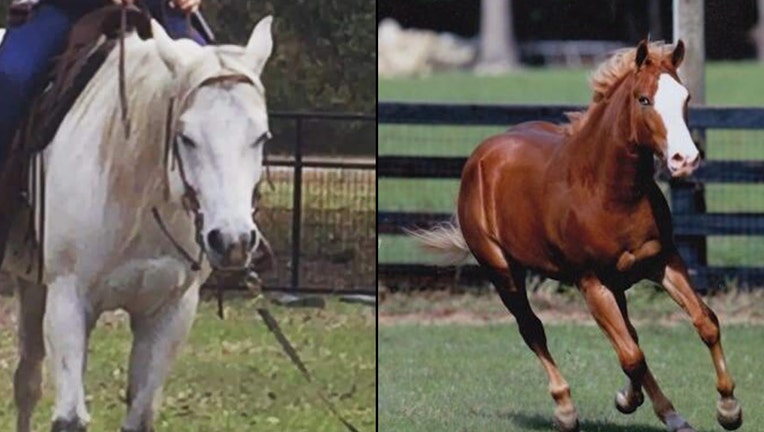 SUMTER COUNTY, Fla. - The Sumter County Sheriff's Office is urging horse owners to be cautious after several horses have been reported stolen and later killed for their meat in Florida.

The warning comes a day after a Central Florida family found their 10-year-old horse, Jayda, dead across from the pasture where she was kept. Tamara Weaver told FOX 35 News that Jayda's fence was cut and she was stolen.

"Jayda was very loving and friendly with people she knew. I can not believe she went with them willingly," Weaver said. "She was my happiness and my joy."

"We are currently investigating an animal cruelty case that involved a horse being stolen and harvested for meat, from the Sumterville area," the sheriff's office wrote on Facebook. "Although this is the only incident in Sumter County, through the investigation we have learned it is on the rise throughout the state."

Last week, authorities say a thoroughbred horse was taken from a family's property in Palmetto. Deputies said they helped the victim search the surrounding area and found the horse dead and slaughtered for its meat in a nearby field.

Manatee County deputies released a security video showing who they believe is a person of interest in that case. They are currently working to identify the person in the video. A $13,000 reward is being offered for information leading to an arrest.

An Ocala woman believes her horse, HotRod, was killed on Thanksgiving.

Tammy Davis said she got a phone call from the person who boards HotRod, saying her horse was attacked and dead.

“This was not an animal. There were no claw marks. These were nice, clean, cuts,” she said. “They cut the meat from both sides of the body. It wasn’t just one side like it got attacked by a predator.”

The Sumter County Sheriff's Office said they are taking proactive measures and performing extra patrols on properties that house livestock.