Person of interest in horse slaughter case seen in video

Manatee County deputies are searching for the man in this surveillance video, saying he is a person of interest in the case of a horse slaughtered for its meat.

PALMETTO, Fla. - Manatee County deputies are working to identify a man in surveillance video who, they say, is a person of interest in the case of a horse slaughtered for its meat.

In the video, the man is seen walking toward the horse stable – located in the 5800 block of Buckeye Road in Palmetto -- with a coiled rope on his right shoulder. In another angle, you can see his face.

"They're their children,” said Steve Stephens, a friend of the horse owner. “It's like taking a family member away from you.”

Stephens said the family is struggling to understand how someone could do this.

According to deputies, the burglar broke through a locked gate at the farm sometime between Sunday night and Monday morning, and stole the horse. 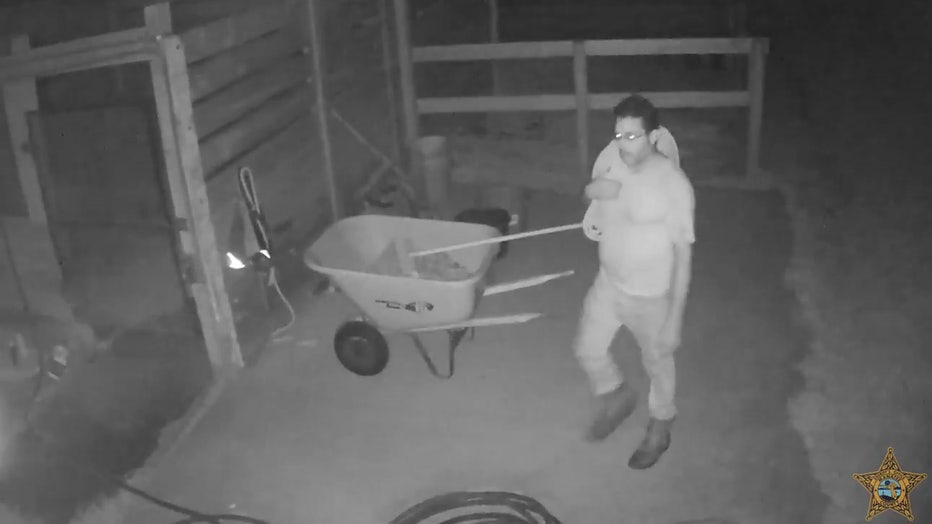 "It's very suspicious why this person is on this property. There are indications that this could be the person who's responsible for taking the horse. We don't know right now. We want to talk to them," said Randy Warren, spokesperson for the Manatee County Sheriff's Office.

After the horse was taken, it was slaughtered and gutted for its meat. Deputies and its owner later found in a nearby field.

"I just wish I could say, 'Stop. Quit doing it. Go away,'” Stephens said. “I wish them bad karma and if you keep doing it. You will get caught.”

Stephens knows exactly what it's like. Back in 2015, his horse was also slaughtered and stolen out of his stables just miles away. It led him to beef up his security, installing high-tech laser beams, a video surveillance system, and multiple special locking systems.

The most recent case comes just days after a horse was slaughtered in Ocala on Thanksgiving. The Manatee County Sheriff's Office is now investigating any possible connections.

If you recognize the man in the video or have any information about what happened, contact the Manatee County Sheriff's Office at 941-747-3011 or Crime Stoppers of Manatee County at 866-634-8477.