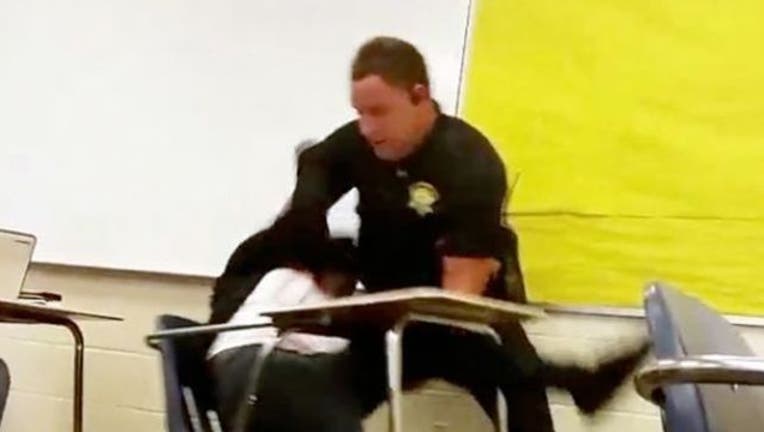 COLUMBIA, S.C. (AP) -- A deputy who flipped a disruptive student out of her desk and tossed her across her math class floor was fired on Wednesday.

The sheriff called his actions "unacceptable," and said videos recorded by her classmates show the girl posed no danger to anyone.

"What he should not have done is throw the student," Richland County Sheriff Leon Lott said. "Police officers make mistakes too. They're human and they need to be held accountable, and that's what we've done with Deputy Ben Fields."

Scott Hayes, an attorney for the deputy, said in a statement released to local media that the officer's actions were justified and lawful. He said Fields wouldn't have any comment because of the federal investigation.

Lott thanked the FBI for investigating whether civil rights were violated, and school officials for promising to review how police are used for discipline.

"They need to understand that when they call us, we're going to take a law enforcement action," Lott said. "Maybe that ought to have been something handled by the school without ever calling the deputy."

The sheriff also had stern words for the student who started the confrontation by refusing to hand over her cellphone after her math teacher saw her texting in class - a violation of school policy.

Both she and another student who verbally challenged the officer's actions during the arrest still face misdemeanor charges of disturbing schools, punishable by up to a $1,000 fine or 90 days in jail, Lott said, although in most cases, judges impose alternative sentences that keep students out of jail.

"The student was not allowing the teacher to teach and not allowing the students to learn. She was very disrespectful and she started this whole incident," Lott said. "It doesn't justify his actions. But again, she needs to be held responsible for what she did."

Lott also praised the students whose videos put such an intense spotlight on his deputy's actions.

"I can't fix problems if I don't know about it," Lott said. "I would say that every citizen with a camera, if they see something that's going on that disturbs them, they should film it. Our citizens should police us."

Lott said he wouldn't describe Fields as remorseful, but rather sorry it all happened.

The agency's training unit determined from the videos that Fields did not follow proper training and procedure, the sheriff said.

"When you make an arrest of someone who does not have a weapon, you never let go of the subject. When he threw her across the room, he let go of her. That's what violates our policy," Lott said.

"She wasn't a danger at that point; she was just being non-compliant and disrespectful. You try to de-escalate a situation. And when you do have to put your hands on someone, there are other techniques we use."

Lott declined to release Fields' personnel file, but said none of the complaints filed against him came from the school district. He did say that he and other deputies were trained not to throw or push subjects away unless they are in danger.

An expelled student has claimed Fields targeted blacks and falsely accused him of being a gang member in 2013, court records show. That case goes to trial in January.

The girl in the videos remains unidentified, but she has obtained a prominent attorney - Todd Rutherford, who also serves as House minority leader in South Carolina's legislature.

Rutherford contradicted the sheriff's claim Tuesday that the girl "may have had a rug burn" but was otherwise uninjured. The 16-year-old has a hard cast on her arm extending to her thumb after going to the hospital Monday night, he said. She also is complaining of neck and back injuries, and psychological injuries.

Asked about the discrepancy, Lott said officers at the scene and school administrators hadn't told him about any injuries, and "what she had once she obtained an attorney is a different matter."

Email, phone and text messages for Fields have not been returned.

More than a dozen parents and community members vented their anger at Tuesday night's school board meeting. Some, black and white alike, said the issue wasn't racial - and that schools and parents need better ways of handling defiant teens.

Rebekah Woodford, a white mother of three, said removing the deputy from the schools sends the wrong message to students.

"We are sick and tired of black women being abused. You can say it's not racist all you want to," said Craig Conwell, who is black. "If that was my daughter ... that officer being fired would be the least of his worries."