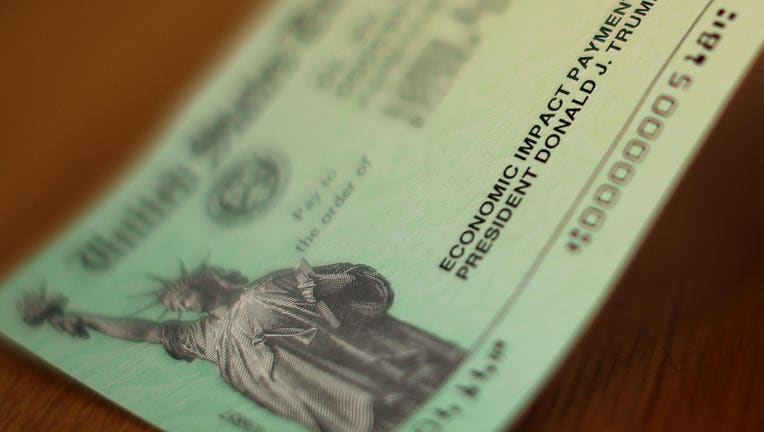 President Donald Trump's name appears on the coronavirus economic assistance checks that were sent to citizens across the country April 29, 2020 in Washington, D.C. (Photo by Chip Somodevilla/Getty Images)

As Congress debates the next round of federal coronavirus relief, a fresh round of stimulus checks for Americans is seeming like an increasingly likely possibility.

Senate Republicans rolled out the HEALS Act — the Health, Economic Assistance, Liability Protections and Schools Act — on Monday, estimated to cost around $1 trillion. Among other measures, the package includes another $1,200 economic impact payment.

The second checks will follow the same eligibility formula as the first round, according to a memo released by the Senate Finance Committee.

The latest proposal also modified the stimulus checks so that families with dependents over the age of 17 who were excluded from the previous payments — a frequent criticism of the CARES Act, signed into law at the end of March — will be able to receive the extra $500. For instance, a married couple with two children could receive up to $3,400.

It's unclear whether the HEALS Act has a limit on how many dependent payments a single household can receive. The House-passed HEROES Act in May capped them at three, or an additional $1,500.

Individuals who have no income and federal benefits recipients are still eligible for the full check amount.

You can use this free calculator from Omni to see how much money you can expect to receive under the HEALS Act.

A vast majority of Americans will not be required to take any action in order to receive the money. The IRS will use their 2019 tax return if filed or their 2018 return as an alternative.

The release of the HEALS Act has ignited a flurry of negotiations between congressional Republicans and Democrats, both of whom are eager for a deal as a resurgence of the virus triggers another wave of business shutdowns.

That gives lawmakers just two weeks to reach an agreement on legislation: The House is scheduled to start its recess by Aug. 3, and the Senate is expected to follow on Aug. 7. But Republicans are arriving at the negotiating table hobbled by party infighting, with some conservative Republicans breaking ranks on Senate Majority Leader Mitch McConnell's plan and arguing the proposed spending is too much.

Some warned that half of Senate Republicans may vote against the legislation.

"The focus of this legislation is wrong," Sen. Ted Cruz, R-Texas, told reporters this week. "Our priority, our objective, should be restarting the economy."

If President Trump signs the legislation before the Senate begins its August recess next week, that could mean Americans would start to see the money at least by the end of the month, if not earlier, as the IRS already has individuals' direct deposit information on hand.

At the beginning of June, the IRS said it had distributed some 159 million payments, worth more than $267 billion. Of those checks, 120 million were sent via direct deposit, 35 million by check and 4 million were made in the form of a prepaid debit card.

An estimated 26 million more individuals will be eligible to receive money under the HEALS Act, according to an estimate from the Tax Foundation.