All 10 living former secretaries of defense have joined in cautioning against any attempt to use the military in the cause of overturning November's presidential election.

EDINBURGH, Scotland - Amid Scotland’s latest coronavirus lockdown, anyone traveling from outside the country would not be allowed in, including U.S. president Donald Trump, according to the country’s leader.

Speaking during a coronavirus update, Scotland's First Minister Nicola Sturgeon said of Trump, "We are not allowing people to come into Scotland without an essential purpose right now. And that would apply to him just as it applies to anybody else."

"Coming to play golf is not what I would consider to be an essential purpose," she added.

According to The Herald, Sturgeon was responding to a report by The Sunday Post speculating that Trump would visit one of his golf courses in Scotland to avoid attending President-elect Joe Biden’s inauguration.

"There is a booking for an American military version of the Boeing 757 on January 19, the day before the inauguration," a source reportedly told The Sunday Post. The source also reportedly told the paper that the plane is the one "normally used by the vice president but often used by the first lady."

Judd Deere, the deputy White House press secretary, told FOX News in a statement, "Anonymous sources who claim to know what the President is or is not considering have no idea. When President Trump has an announcement about his plans for Jan. 20. he will let you know." 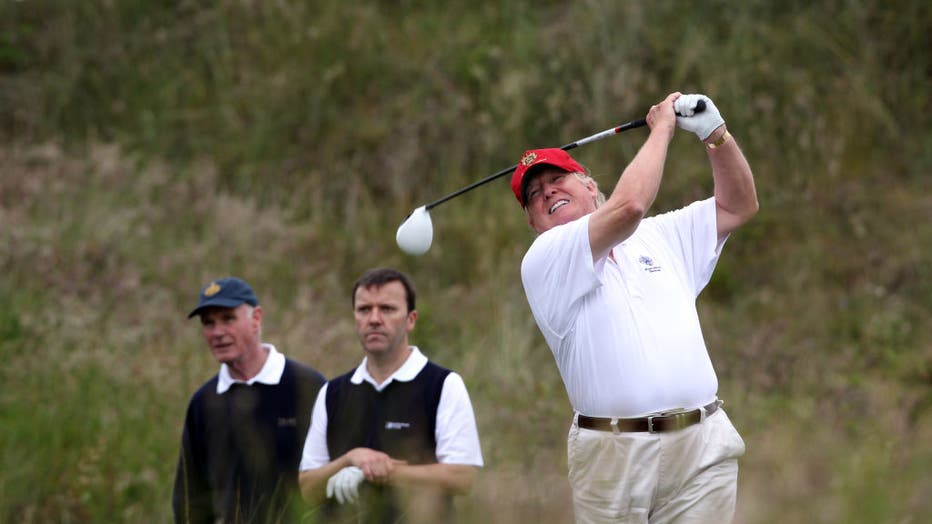 Donald Trump tees off from the third after the opening of The Trump International Golf Links Course on July 10, 2012 in Balmedie, Scotland. The controversial £100m course opens to the public on Sunday July 15.

Trump has not yet told current and former White House aides whether he will attend Biden’s inauguration. He has maintained, without evidence, that there was widespread voter fraud and has been waging a challenge to the 2020 election’s results that has been unsuccessful in the courts.

Meanwhile, Sturgeon has said Scotland’s new restrictions were needed to protect the hard-pressed National Health Service as a new, more contagious variant of coronavirus sweeps across Britain. On Monday, hospitals in England were treating 26,626 COVID-19 patients — 40% more than during the first peak in mid-April.

Many U.K. hospitals have already been forced to cancel elective surgeries and the strain of responding to the pandemic may soon delay cancer surgery and limit intensive care services for patients without COVID-19.

In December, a record 2,930 people were forced to wait 12 hours or more before hospitals could find beds for them, the Health Service Journal reported Monday, citing leaked figures from the National Health Service. The previous high of 2,847 waits of at least 12 hours for a hospital bed was reported in January 2020.

Public health officials hope the new lockdown will reduce the strains on the NHS while they roll out a national vaccination program that targets older people, health care workers and those particularly vulnerable to COVID-19. Britain has approved two vaccine shots so far — one from Pfizer-BioNTech and the other from Oxford University and AstraZeneca.

As of Monday, the NHS had vaccinated 1.3 million people across the U.K. The government plans to have almost 1,000 vaccination centers operating across the country by the end of this week, British Prime Minister Boris Johnson said.

FOX News and the Associated Press contributed to this story. This story was reported in Los Angeles.