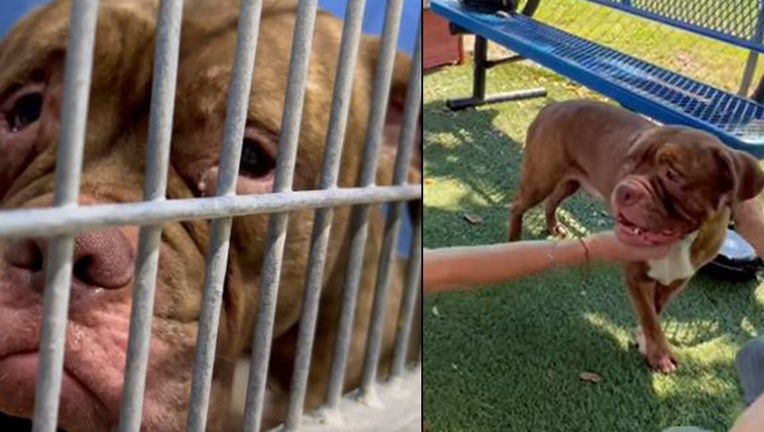 ORANGE COUNTY, Fla. - It only took 2 seconds for Guapo to break the internet's heart – and less than a week to find his forever home!

The 2-year-old dog was just adopted from Orange County Animal Services after a video about owner surrenders showed his sad face behind the bars at the shelter.

"Animal surrenders are one of the toughest things for us here at OCAS to understand," the shelter wrote on Facebook. "We know there are times when people are faced with genuine dilemmas and emergencies. We know there are truly heartbreaking reasons why someone may have to give up a dog. But the reality is, most of the reasons we hear when people surrender don't really make any sense to us."

Guapo was surrendered to the shelter last week. The staff says he went unnoticed for days because he would hide behind his kennel mate and rarely paid attention to people walking by.

"His sad face caught our attention, because it spoke volumes. Guapo was an owner surrender, as most of the dogs at the shelter are. But he seemed to take it harder than most. He was the embodiment of what our dogs feel every day, and his expressive eyes and face told his story better than we could."

TRENDING: Driver spots tiny kitten on side of the road, ends up rescuing 13

The young pooch was featured in a video about some of the dogs currently at the shelter set to Kate Bush's song "Running Up That Hill" from the new season of "Stranger Things."

The clip was viewed over 7,000 times and interest in Guapo started to pour in!

"The response we received for him was overwhelming," the shelter said. "People came in by the dozens to see Guapo, and we received a ton of email requests for information on this poor sad dog."

The next video the shelter posted was a very happy Guapo hanging out with his new family after being adopted!

TRENDING: Central Florida BBQ restaurant drops prices so everyone 'can at least afford to eat out,' owner says

"After just a few minutes in the play yard with his new family, we started to see a different look on Guapo's face. A slow and shy smile, and a light in his eye that only comes from hope and happiness. He seemed to realize something was different. He wagged his tail and laid close to his adopters, calm and at peace probably for the first time since he arrived. Guapo knew he was going home."

If you have room in your family for a furry friend, the shelter needs adopters to step up. Orange County Animal Services currently has more than 700 animals under its care, 383 physically at the shelter and an additional 319 in foster care. On Thursday alone the shelter received 114 animals, 40 of which were confiscated due to concerns for the poor living situation.

You can view all the animals in need of loving homes on the Orange County Animal Services website.