KYIV, Ukraine - Russian forces tightened the noose around the defenders holed up Wednesday in a mammoth steel plant that represented the last known Ukrainian stronghold in Mariupol, as a fighter apparently on the inside warned in a video plea for help: "We may have only a few days or hours left."

With the holdouts coming under punishing new bombing attacks, another attempt to evacuate civilians trapped in the pulverized port city failed because of continued fighting.

Meanwhile, the number of people fleeing the country topped 5 million, the Kremlin said it submitted a draft of its demands for ending the war, and the West raced to supply Ukraine with heavier weapons to counter the Russians' new drive to seize the industrial east.

With global tensions running high, Russia reported the first successful test launch of a new type of intercontinental ballistic missile, the Sarmat. President Vladimir Putin boasted it can overcome any missile defense system and make those who threaten Russia "think twice," and the head of the Russian state aerospace agency called the launch out of northern Russia "a present to NATO."

The Pentagon described the test as "routine" and said it wasn't considered a threat.

On the battlefield, Ukraine said Moscow continued to mount assaults across the east, probing for weak points in Ukrainian defensive lines. Russia said it launched hundreds of missile and air attacks on targets that included concentrations of troops and vehicles. 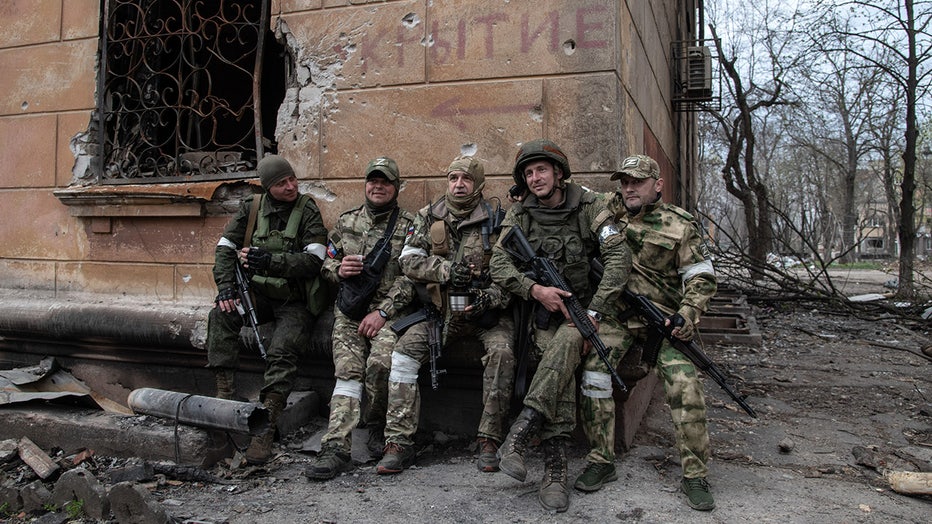 Russian fighters rest behind a building some 500 meters from Ukrainian positions around the embattled Azovstal plant in Mariupol. (Photo by Maximilian Clarke/SOPA Images/LightRocket via Getty Images)

The Kremlin's stated goal is the capture of the Donbas, the mostly Russian-speaking eastern region that is home to coal mines, metal plants and heavy-equipment factories. Detaching it would give Putin a badly needed victory two months into the war, after the botched attempt to storm the capital, Kyiv.

Analysts say the offensive in the east could devolve into a war of attrition as Russia runs up against Ukraine's most experienced, battle-hardened troops, who have been fighting pro-Moscow separatists in the Donbas for the past eight years.

Russia said it presented Ukraine with a draft document outlining its demands for ending the conflict — days after Putin said the talks were at a "dead end."

Kremlin spokesman Dmitry Peskov said that "the ball is in their court, we’re waiting for a response." He gave no details on the draft, and it was not clear when it was sent or if it offered anything new to the Ukrainians, who presented their own demands last month.

Ukrainian President Volodmyr Zelenskyy said he had not seen or heard of the proposal, though one of his top advisers said the Ukrainian side was reviewing it.

Moscow has long demanded Ukraine drop any bid to join NATO. Ukraine has said it would agree to that in return for security guarantees from a number of other countries. Other sources of tension include the status of both the Crimean Peninsula, seized by Moscow in 2014, and eastern Ukraine, where the separatists have declared independent republics recognized by Russia. 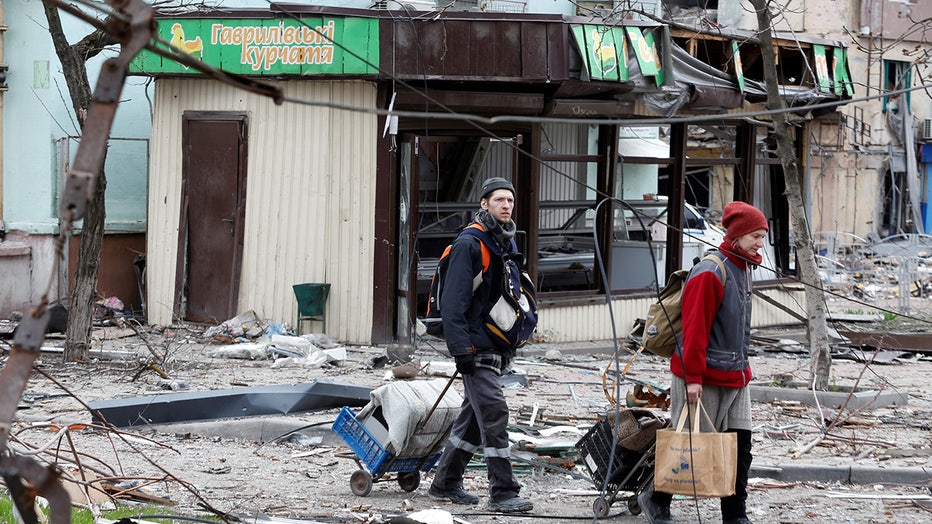 Residents walk near damaged buildings in Mariupol on April 18, 2022. (Photo by Victor/Xinhua via Getty Images)

In devastated Mariupol, Ukraine said the Russians dropped heavy bombs to flatten what was left of the sprawling Azvostal steel plant, believed to be the last pocket of resistance in the city.

A few thousand Ukrainian troops, by the Russians’ estimate, remained in the plant and its labyrinth of tunnels and bunkers spread out across about 11 square kilometers (4 square miles). Zelenskyy said about 1,000 civilians were also trapped there.

A Ukrainian posted a video plea on Facebook urging world leaders to help evacuate people from the plant, saying, "We have more than 500 wounded soldiers and hundreds of civilians with us, including women and children."

The officer, who identified himself as Serhiy Volynskyy of the 36th Marine Brigade, said: "This may be our last appeal. We may have only a few days or hours left." The authenticity of the video could not be independently verified.

The Russian side issued a new ultimatum to the defenders to surrender, but the Ukrainians have ignored all previous demands.

All told, more than 100,000 people were believed trapped with little if any food, water, medicine or heat in Mariupol, which had a pre-war population of over 400,000.

Ukrainian Deputy Prime Minister Iryna Vereshchuk said the latest effort to open a safe corridor for women, children and the elderly to escape failed because the Russians did not observe a cease-fire. Many previous such agreements have fallen apart because of continued fighting.

RELATED: Ukraine zoo workers who stayed behind to care for animals found shot to death

U.S. Secretary of State Anthony Blinken warned of the horrors yet to be revealed in Mariupol, given the death and destruction left behind in Bucha, near Kyiv, after the Russians retreated.

"We can only anticipate that when this tide also recedes from Mariupol, we’re going to see far worse, if that’s possible to imagine," he said.

Mariupol holds strategic and symbolic value for both sides. The scale of suffering there has made it a worldwide focal point of the war. Mariupol’s fall would deprive Ukraine of a vital port, complete a land bridge between Russia and the Crimean Peninsula, and free up Russian troops to move elsewhere in the Donbas.

As Russia continued to funnel troops and equipment into the Donbas, Western nations rushed to boost the flow of military supplies to Kyiv for this new phase of the war, which is likely to involve trench warfare, long-range artillery attacks and tank battles across relatively open terrain.

U.S. President Joe Biden is expected to announce a new weapons package in the coming days that will include additional artillery, and Canada and the Netherlands also said they would send more heavy weaponry.

Also, a senior U.S. defense official, speaking on condition of anonymity to discuss the Pentagon's assessment of the war, said the training of Ukrainian personnel on American 155 mm howitzers has begun in a European country outside Ukraine, and the first of 18 promised such weapons began arriving on the continent.

Putin, meanwhile, boasted that the Sarmat missile has "no equivalents in the world." The Sarmat is intended to eventually replace the Soviet-built missile code-named Satan by NATO as a major component of Russia's nuclear arsenal.

It will "make those who, in the heat of frantic, aggressive rhetoric, try to threaten our country think twice," the Russian leader said.

Looking for a path to peace, U.N. Secretary-General Antonio Guterres requested meetings with Putin and Zelenskyy in their capitals to discuss how to stop the fighting. The U.N. received no immediate response.

Associated Press journalists Mstyslav Chernov and Felipe Dana in Kharkiv, Ukraine; Yesica Fisch in Kramatorsk, Ukraine; and Robert Burns and Aamer Madhani in Washington contributed to this report, as did other AP staff members around the world.