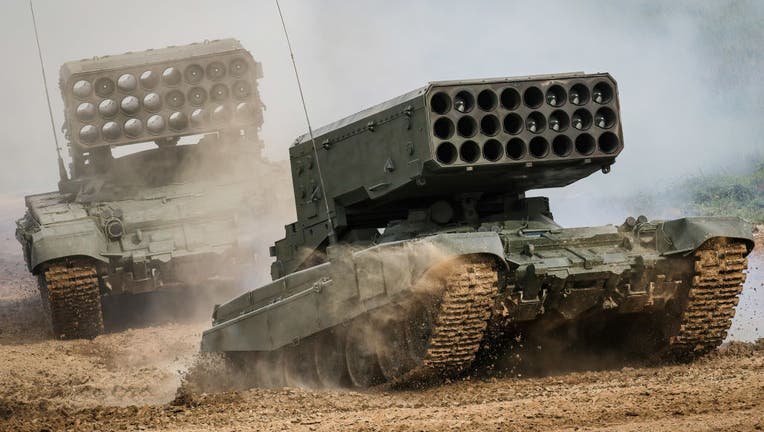 NEW YORK - Russia has used a weapon in Ukraine capable of vaporizing human bodies and the UK Ministry of Defence says Russia has confirmed its use.

Thermobaric weapons consist of a fuel container and two separate explosive charges, with the first detonating to disperse the fuel particles and the second igniting the dispersed fuel and oxygen in the air.

That can cause human bodies to vaporize.

The Pentagon has said that Russian mobile launchers for thermobaric weapons were spotted inside Ukraine, but couldn't confirm their use.

The UK MoD said its Russian counterpart said the TOS-1A weapon system had been deployed.

Such weapons are designed to target enemy troops and weapons over a broad area, and their use in populated areas inevitably would lead to mass casualties among civilians.

Cluster bombs, rockets, and artillery shells open in the air, releasing submunitions, or "bomblets," that are dispersed over a large area and simultaneously hit multiple targets.

Beyond the initial impact, bomblets have a high rate of failure to explode, posing a long-time threat of killing and maiming people for a long time after they were fired.

Satellite images show that a massive Russian convoy that was outside the Ukrainian capital since last week has split up and fanned out into towns and forests. Artillery pieces have moved into firing positions.