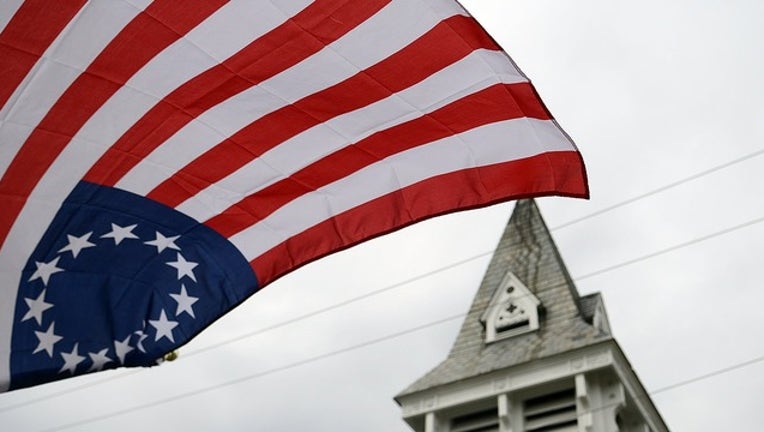 Frank Siller, who started the foundation in memory of his brother - a New York firefighter who lost his life on 9/11 - said that he is "beyond words" over the response to Limbaugh's Betsy Ross shirt.

Limbaugh, who appeared on "Fox & Friends," last week explained that he released the shirt to give people an opportunity to push back on those who trash American values and do not stand for American ideals. He explained that he and his wife came up with the idea for the shirt after former San Francisco 49ers quarterback Colin Kaepernick reportedly urged Nike to nix the release of a sneaker that featured a Betsy Ross flag over the flag's perceived slavery-era connections.

"Him [Limbaugh] and his wife Catherine are taking the goodness of America, letting the people push back, because we're sick and tired of people bashing America," Siller said, highlighting police officers having water thrown on them in New York City in a new viral video.

"These great Americans put their lives on the line for us every single day, so not only are they reaching out to the goodness of America, because of this money donated to the Tunnel for Towers foundation, we're taking care of the greatness of America, these people who serve our country."

The shirt, which sells for $27, generated the most revenue on Limbaugh's website to date.

"This shirt became a vehicle for people to push back it is one of the most uplifting things that I have been involved in because this is the American people generating enough revenue to be able to send 1.5 million dollars to the Tunnel to Towers foundation," Limbaugh said on Friday.

Siller explained that the foundation helps the families of fallen police officers, first responders and soldiers -- many of whom left behind a grieving wife and children. The new funds have enabled the foundation to immediately pay off the mortgages of six heroes, and that is just the beginning, said Siller.

Among the recipients is the family of Ohio police officer Steve Disario, whose wife was expecting their seventh child when he was killed in the line of duty in 2017.

"Of the one percent that serve, if the other 99 percent would take care of these great Americans, we could take care of every mortgage for every police officer, every firefighter and every Gold Star Family member," he said.