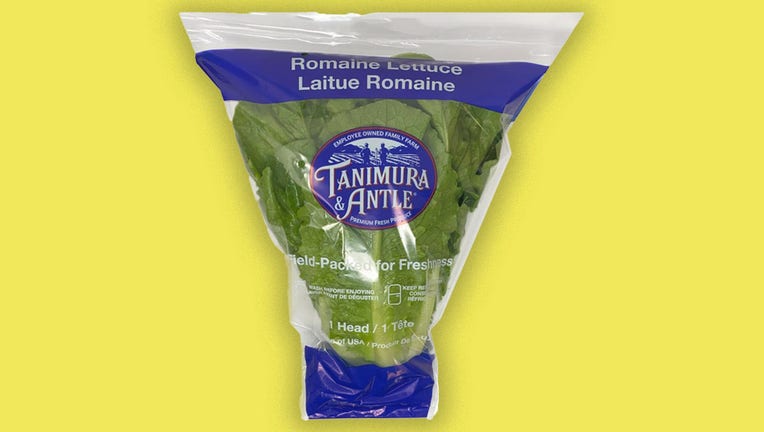 Tanimura & Antle Inc. voluntarily recalled single head romaine lettuce that was shipped to nearly two dozen states over fears that the leafy greens may be contaminated with E. coli.

The notice, which was posted to the Food and Drug Administration's website, comes almost exactly a year after a pre-Thanksgiving outbreak of E. coli tied to lettuce from California sickened hundreds of consumers and led to a blanket warning about romaine lettuce.

The latest warning over Tanimura & Antle's product was based on a test result from a random sample that was collected and analyzed by the Michigan Department of Agriculture and Rural Development, according to the FDA's announcement.

E. coli, which had been blamed for multiple romaine lettuce poisoning outbreaks over the past few years, causes a diarrheal illness often with bloody stools, according to the FDA.

Most healthy adults can recover completely within a week, however, young children and the elderly may be at risk for developing a form of kidney failure called Hemolytic Uremic Syndrome (HUS). HUS can either result in serious kidney damage or even death, the agency said.

"It is unlikely that this product remains at retail establishments due to the shelf life of lettuce and the number of days that have passed," the company said, adding that if found, the product should be thrown out.

Retailers and distributors can identify the potentially affected products through the Produce Traceability Initiative (PTI) sticker. The PTI codes are 571280289SRS1 and 571280290SRS1.

To date, no other products or pack dates are being recalled and the company has not received any reports of illnesses associated with the recalled product.

U.S. health officials called an end to the 2019 outbreak in January after 167 people across 27 states fell ill, the CDC said. No one died, but 85 people were hospitalized, including 15 people who developed a type of kidney failure.

Multiple outbreaks tied to the bacteria have broken out in the past. One of them, which occurred in spring 2018, sickened more than 200 people and killed five others. That outbreak was traced to tainted irrigation water near a cattle lot. E. coli is found in the feces of animals such as cows.

It’s not clear exactly why romaine keeps popping up in outbreaks, but food safety experts note the popularity of romaine lettuce and the difficulty of eliminating risk for produce grown in open fields and eaten raw.