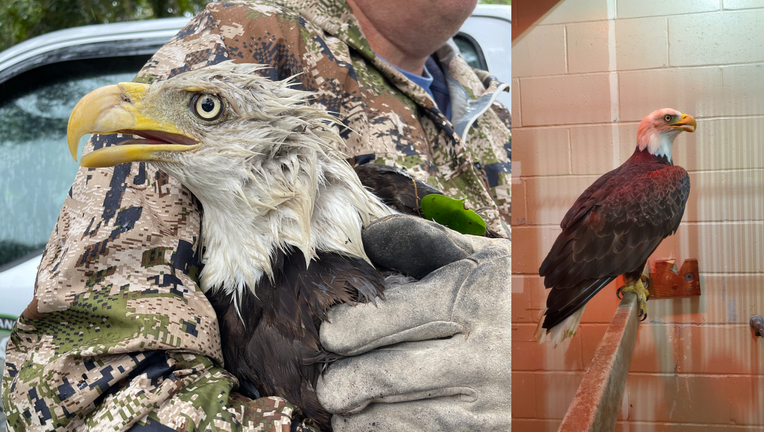 A bald eagle possibly injured during a territorial fight in Florida is now recovering and being treated at the University of Florida's College of Veterinary Medicine.

According to a Facebook post by the Florida Wildlife Commission, a man reported seeing two bald eagles "fighting mid-air…with talons entangled in a territorial battle." During the fight, both eagles crashed to the ground, and one flew away, while the other did not.

The eagle didn't fly away that night, which was concerning enough that a FWC biologist was called in, and brought the eagle to UF.

Sarah Carey, director of communications for UF's College of Veterinary Medicine, said in an email late Tuesday that UF's teams were unable to find any physical injuries on the eagle, but said that it had high levels of lead in its blood.

High levels of lead can cause "weakness, anemia and neurological signs - all of which can contribute to a bird not being able to fly," she wrote, adding that eagles are prone to this because they often scavenge for food.

She said the eagle is being treated with chelation therapy – an injectable treatment that helps to clean the lead from the bird's blood – and other support care. Once the lead toxicity is cleared up, it will be transferred to a rehabilitation facility for flight training and assessment, she said.

She described the bird as bright and feisty.