Epcot and Hollywood Studios reopened on Wednesday for the general public. Like Magic Kingdom and Animal Kingdom, reservations are required.

Some of the most beloved Disney characters like Minnie, Pluto and Mickey are very happy to welcome back guests at Hollywood Studios. Waving from a distance – no hugging allowed.

“At no point – which is weird in a theme park – was I ever on top of other people,” said John Saccheri, theme park blogger for BigFatPanda.com “And I just think that’s so weird because you expect you’re gonna have crowds.”

Disney has been tight-lipped about how many guests they will allow into the parks, but as seen on our SKYFOX video, the capacity is greatly limited.

“They’re not telling us the number,” Saccheri said. “If I had to guess I’m gonna say 30 percent and that’s a total educated guess by looking around. It feels about 30 percent.”

Saccheri has been an annual pass holder for more than 20 years and is a theme park blogger, so he has his pulse on all things Disney and is noticing all of the changes.

Each ride vehicle was one party only, Saccheri adding that "whenever there would be a weaving in and out of a line, there was a Plexiglas wall that was brand new installed.

Even grabbing a bite to eat is a new experience. 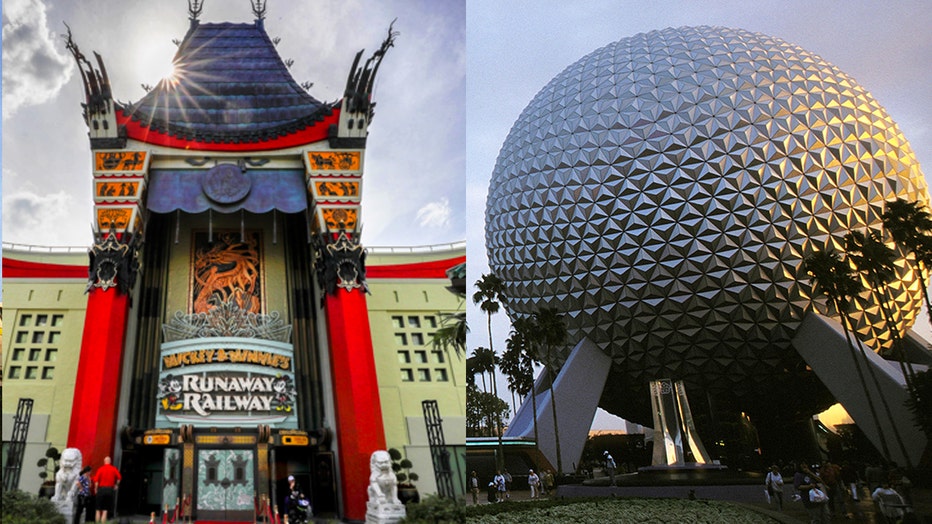 “When it came time for lunch they had us do the ordering on the phone, so they wouldn’t let you into the restaurant until your meal was ready, Saccheri said. “So you ordered on the phone, you paid on the phone.”

RELATED: Here's an inside look at Magic Kingdom, Animal Kingdom on reopening day

With Epcot back open as well, a modified version of the popular Food and Wine Festival began on Wednesday, which is now called “A Taste of Food and Wine.”

Masks are required in the parks, with a few exceptions for relaxation stations and eating.

Florida’s spike in coronavirus cases over the last couple of days has some folks wondering if the parks will shut down again. Earlier this week, Hong Kong Disney announced it was shutting down again because of a spike in cases there. But for now Disney officials said they will continue to monitor the situation and follow health guidelines.

“I can’t see them doing anything better,” Saccheri said.