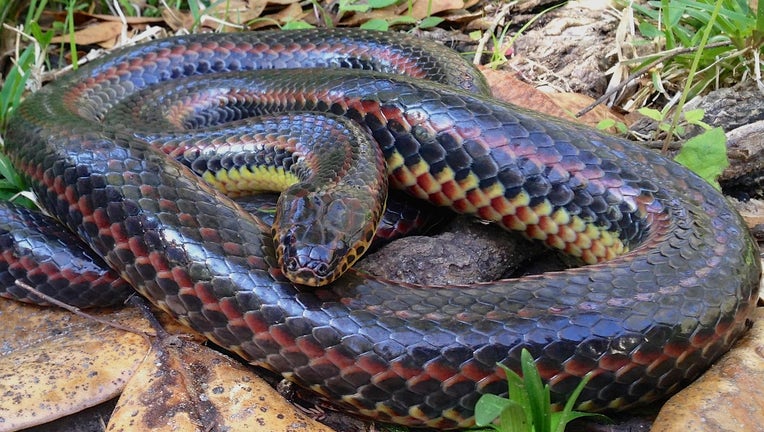 OCALA, Fla. - A woman hiking in the Ocala National Forest stumbled upon a rare snake that hasn't been seen in the county in over 50 years!

The Florida Fish and Wildlife Conservation Commission (FWC) confirmed that hiker Tracey Cauthen spotted a rainbow Snake. The reptile with the colorful scales was about 4-feet in length.

"The Florida Museum of Natural History confirms this is the first record of this species in Marion County since 1969!," FWC wrote on Facebook. "Our biologists speculate the recent drawdown of Rodman Reservoir had this rainbow snake on the move."

According to FWC, rainbow snakes are highly-aquatic, spending most of their life hidden amongst aquatic vegetation. They are seldom seen due to their 'cryptic habits.' FWC says that this type of snake tends to burrow near creeks, lakes, marshes, and tidal mudflats.

Rainbow snakes specialize in eating eels, a practice which has earned them the nickname “eel moccasin."

FWC says that rainbow snakes are non-venomous and can grow between 40 to 54 inches long. The longest on record was 66 inches.

In Florida, they have been spotted throughout the Panhandle, north Florida, along the St. John’s River to the northern part of Central Florida.