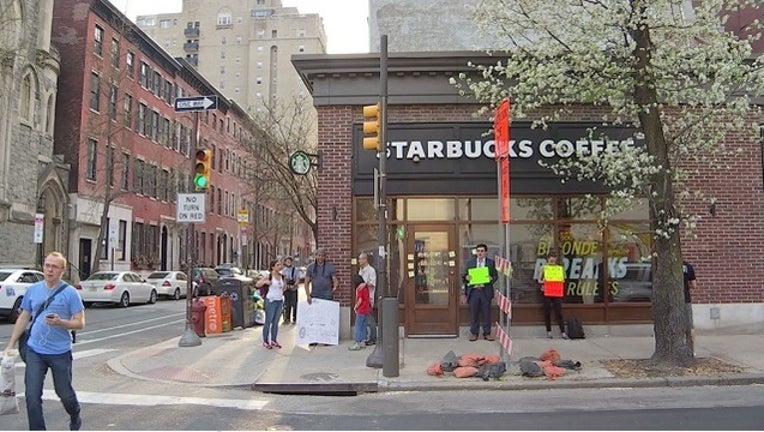 NEW YORK (AP) - After two black men were arrested at a Starbucks in Philadelphia, CEO Kevin Johnson said the company will review what happened and train workers on "unconscious bias."

Johnson, in an interview with The Associated Press on Monday morning, said the arrests last week were "reprehensible" and should not have happened. Questions and answers have been edited for length and clarity:

Q: Do you know more about what happened?

A: The incident that unfolded in our store last Thursday and the outcome of that were reprehensible. The decision to call the police in that instance was wrong and that led to an outcome that should not have happened. I've apologized to the two gentlemen that went through that experience, and I apologized to the community of Philadelphia.

Q: Have you met with the two men yet (as of Monday morning)?

A: I have not met with them yet but I am scheduled to do so while I'm here in Philadelphia over the next couple of days.

Q: What do you want to tell them?

Q: How can you make sure this doesn't happen again?

A: A big part of this is ensuring that I review all of the elements that could have contributed to this. Every company makes mistakes, but great companies are the ones that learn from those mistakes and take appropriate action. And that's exactly what I intend to do. In this particular instance, the guidelines that were provided on when to call the police had ambiguity in them. If there's a threat or a major disturbance in the store, certainly that would be an appropriate time to call the police. In this instance, none of that existed.

Q: Did you watch the video of the arrest?

A: I have watched the video, and I must admit it's very hard to watch. That is not what Starbucks stands for.

Q: So what's the first step? Is it training employees?

A: The first step is doing a thorough review to understand how this could even happen in the first place. And from that, we're making conclusions on the set of things that we need to change to ensure that it doesn't happen. Clearly, we will be making changes in the guidelines that were provided some of the stores. We will focus on the training; I think there's additional training that we will take action on for store management, including training around unconscious bias. So those are just two examples of actions we're taking, but the entire set of actions will be a result of the review that we're doing.

Q: You say unconscious bias; do you think what happened was racism?

A: Starbucks was built around the concept of a third place where we create a warm and welcoming environment for all customers. What I do know is that did not happen in this instance. And that is what we're focused on.

Q: Have you seen an impact on the business, or do you expect there to be one?

A: My priority is to ensure that we're focused on the customer experience and all the things that we're doing to address this. And I know if we do that in the right way and create that Starbucks experience, the business will take care of itself. But my priority right now is focusing on the review, the assessment and the action that we're going to take to ensure this does not happen again.