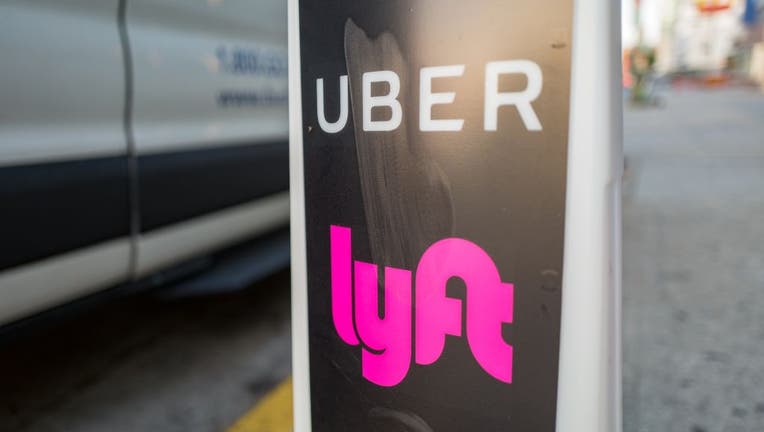 Close-up of vertical sign with logos for ridesharing companies Uber and Lyft, with wheels of a car in the background, indicating a location where rideshare pickups are available in downtown Los Angeles, California, October 24, 2018. (Photo by Smith C

Proposition 22 asked voters to decide if Uber, Lyft and other app-based drivers should remain independent contractors, or be eligible for the benefits that come with being company employees.

A vote YES means voters support the idea of having gig workers be independent contractors.

Prop. 22 is a battle that started when Assembly Bill 5 was signed into law last year.

AB5 is the legislation that classified gig workers such as drivers for Lyft and Uber as company employees rather than independent contractors. This also included delivery drivers.

Proposition 22's backers say it would allow app-based drivers to gain additional income by working a few hours a week on schedules they determine as
independent contractors.

David Cruz is with The League of United Latin American Citizens (LULAC). They favor Prop. 22 because of the independence he says drivers want.

“I think that YES on 22 is going to permit more people to continue working with new and improved benefits that AB5 does not deliver and I just don’t want to see them go away. The reality today is that people want flexibility in their work schedules. I want it. They want it. So, YES on 22 is going to ensure that’s’ going become a state standard with app-based drivers," Cruz told FOX 11’s Hal Eisner.

RELATED: The benefits and drawbacks of California Prop. 22

Rey Fuentes is on the NO side for Prop 22 saying “It really comes down to the substance of the initiative. There’s a reason that five of the richest corporations in the world are spending $181 million to convince California voters that somehow this ballot proposition will benefit them."

There has been record-pace spending so far — about $220 million and climbing — in the fight between the titans of the so-called gig economy and labor unions, including the International Brotherhood of Teamsters.