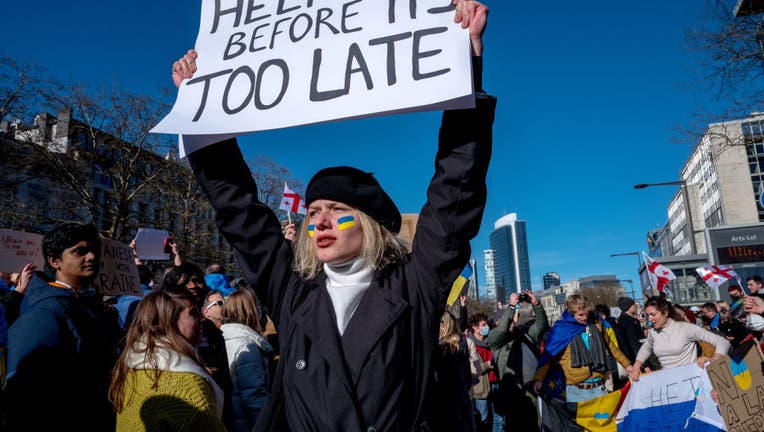 BRUSSELS, BELGIUM - FEBRUARY 26: A protester holds a banner calling for imminent help for Ukraine during a demonstration against Russia's invasion of Ukraine held in front the building of the Permanent Mission of Russia to the E.U. on February 26, 20

The Rev. Myron Myronyuk stayed up all night at home in Pennsylvania as his twin brother tried to flee Kyiv, the Ukrainian capital, only to turn back because the road out was choked with traffic. His in-laws, also in Ukraine, told him they couldn’t get basics like bread and milk.

There was little Myronyuk could do but pray that his loved ones would survive the Russian invasion of Ukraine.

A sense of helplessness overcame Ukrainians in America as the war unfolded half a world away, with little chance their loved ones in Ukraine would find refuge in the U.S. any time soon. For now, they are trying to donate money and supplies, desperately seeking advice from immigration attorneys about how to get family here and pleading for world leaders to intervene more forcefully.

RELATED: Russian troops close in on Kyiv as residents flee

"I say, ‘We’re praying for you, we wish you to be safe, go to a safe place,’" said Myronyuk, pastor of St. Vladimir Ukrainian Catholic Church in Scranton, Pennsylvania. "We have to continue to pray and ask God for help," he said, but "there’s not much else we can do here."

Demonstrators gathered in Manhattan’s Times Square and near the Russian Federation’s mission to the United Nations on Thursday, waving blue-and-yellow Ukrainian flags and denouncing Russian President Vladimir Putin. About 100 people took to an overpass in Chicago, putting their hands to their hearts as the Ukrainian national anthem blared from a big speaker.

"The worst part is we cannot help them any more. We would send money, but everything is closed," said Chicago resident Hrystyna Klym, who has been in the U.S. for 15 years and has family in Ukraine. Klym volunteers with an organization that has regularly sent clothes, magazines, money and other items to help Ukraine’s needy, particularly wounded soldiers, but she said there’s no way to donate directly now.

Conditions in Ukraine continue to worsen as many flee the country as Russia invades. FOX 11's Hal Eisner spoke to one SoCal woman who has family in both Ukraine and Russia.

At Ukrainian Village Food & Deli in the Cleveland suburb of Parma Heights, Mila Radeva, 39, said her father — who lives near the Ukrainian port city of Odessa — had taken shelter in his basement as explosions rocked the area.

"A lot of people are going to die," said a worried Radeva, who emigrated to the U.S. 20 years ago. Asked if her father and other relatives might flee to another country, she said: "There’s no place for them to run."

Ekaterina Mouratova, a Miami immigration attorney, said Thursday was "a crazy day," with phone calls and emails from Ukrainians and Russians seeking refuge in the United States. Ukrainians hope to flee Russian troops, while Russians worry they may get drafted and have bank accounts frozen in a wartime economy.

Street fighting has broke out across Kyiv as Russia continues its invasion of Ukraine's capital.

She offered little encouragement, predicting Poland would be a far more realistic possibility for escape.

"There is no effective legal mechanism to bring people here," she said.

Ukrainians could potentially flee their country, fly to Mexico from Europe as tourists, and enter the U.S. by land to claim asylum, as a growing number of Russians have done over the last year, Mouratova said. Fleeing war, however, is not considered legal grounds for asylum.

Ukrainians could also be eligible for refugee resettlement — under which up to 125,000 can be accepted in the U.S. this year after being approved abroad — but processing has been slow as U.S. authorities focus on Afghans seeking to flee Taliban rule.

White House press secretary Jen Psaki said the U.S. was prepared to accept Ukrainian refugees, "but we certainly expect that most if not the majority will want to go to Europe and neighboring countries."

Students sing songs while sheltering from fighting in Kyiv

As fighting and explosions break out in Ukraine's capital involving Russian troops, the students began singing as they sheltered in place.

Immigration advocates urged the Biden administration to grant Temporary Protected Status to Ukraine, a form of reprieve for its citizens already in the United States. The U.S. has granted TPS to 12 countries afflicted by war or natural disaster.

Chicago immigration attorney Natalia Blauvelt, who also fielded calls from desperate Ukrainian clients, potential clients and friends, said they are "absolutely devastated, extremely sad.... They are panicking because of what is happening in Ukraine, and many of them don’t know what to do and help their relatives."

More than 1 million people in the U.S. report Ukrainian ancestry, according to the Census, with sizable populations in New York City, Chicago, Seattle, Sacramento and Los Angeles.

Oksana Bilobran, an attorney in Seattle’s Office of Immigrant and Refugee Affairs, came to the U.S. from Ukraine 17 years ago. She and others have been urging elected officials to do more to support Ukraine, including securing a no-fly zone over the country and providing humanitarian protection for Ukrainians currently in the U.S. so they don’t have to return.

They are also working on ways to support Ukraine financially, since apps like Venmo and PayPal aren’t readily available there.

"We need to up our fundraising to provide necessities, because the Ukrainian military is no match for the Russian army, so we need to provide as much help as we can here," she said.

In Philadelphia, the United Ukrainian American Relief Committee — formed in World War II to help resettle Ukrainian refugees — pivoted to a wartime footing once again, readying a container packed with clothing, diapers, wheelchairs, medical supplies and personal hygiene items. Donations had increased over the past several weeks as Russia massed its military on Ukraine’s doorstep, according to the executive director, Motrja Watters.

The group plans to send the container to Ukraine, or Poland if Russia blocks humanitarian aid. Watters, whose parents were born in Ukraine, said relief groups are coordinating their response so aid is delivered as effectively as possible.

"Everybody’s trying to get a grip on the how and the where the needs are in Ukraine," she said. "We’re working around the clock... There are so many people already injured, families already split up, and those are the people we need to help right now."