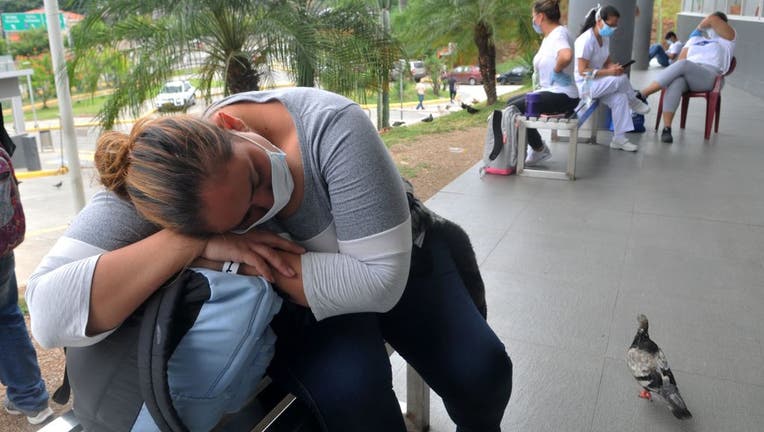 OAK HILL, Ill. - Americans are feeling isolated and anxious. They fear they or their loved ones will get sick. They worry about their jobs.

As the coronavirus pandemic upends lives across the United States, it’s taking a widespread toll on people’s mental health and stress levels, according to a survey that finds a majority of Americans felt nervous, depressed, lonely or hopeless in the past week.

“It’s just so overwhelming, the fear and anxiety,” said 49-year-old Julie Hitchcock of Milwaukee, who had pneumonia last fall. She spent two weeks on a ventilator and 10 weeks away from work, only to be furloughed because of the coronavirus shutdown shortly after resuming work full time.

Her furlough ended last week. She rides city buses to and from her job at an international education nonprofit, and that drives her fears that she could get sick or unknowingly have the virus and infect someone else, who then might end up on a ventilator.

The poll conducted last week is the first wave of the COVID Impact Survey by NORC at the University of Chicago for the Data Foundation. The survey aims to provide an ongoing assessment of the nation’s mental, physical and financial health during the pandemic.

Roughly two-thirds of Americans say they felt nervous, depressed, lonely or hopeless on at least one of their past seven days, the poll found. For each of the four emotions, close to 2 in 10 Americans said they felt that way on three or more days. Fourteen percent said they felt reactions such as sweating, becoming nauseous or hyperventilating when thinking about their experience with the pandemic.

But the survey also found some bright spots as Americans cope with the pandemic: About one-fifth report more frequent texting, phone calls or online contact with friends and family.

Jo Ellen Meyers Sharp of Indianapolis, a master gardener who makes her living through freelance writing, speaking to gardening groups and designing flower boxes, said the economic uncertainty is difficult, but the social isolation is worse.

MORE NEWS: What is allowed to open under phase one of Governor DeSantis' plan to reopen Florida?

She had begun antidepressants a year ago after the death of a sister and the loss of writing and editing jobs. She was doing better until the pandemic cost her a job at a garden center and all of her spring and summer speaking engagements, and then took away her social life. She called her doctor this week after spending last weekend moving only between the bed and couch.

“I’ve always seen myself as an affectionate person who likes to socialize, but you can’t do that,” said Meyers Sharp. She lives alone but speaks to friends and her son via text and phone, and meets with a gardening communicators’ organization and a book club on the video conferencing app Zoom. But, she said, “You need a hug every once in a while.”

The survey finds women more likely than men to say they had felt at least one of the distressful emotions in the past week, 71% to 56%.

Emotional distress also was especially common among younger adults. Some 81% of Americans under 30, along with 70% of those age 30 through 44, report feeling nervous, depressed, lonely or hopeless at least one day in the past week. That compares with 62% of those age 45 through 59 and 48% of adults 60 and over.

Physical distancing, the lack of predictability, economic upheaval and the inability to mourn the death of loved ones in traditional ways all are taking their toll, said Dr. Karestan Koenen, a professor of psychiatric epidemiology at the Harvard School of Public Health.

“We can’t do all the normal stuff,” said Koenen. “It feels like we’re more alone.”

She said stress among parents is high whether they work from home or have to leave because “all the things parents worked to set up in their lives have been taken away from them” as schools and day cares closed. What’s more, they’re worried about their children staying on track in school and that they’re safe and happy, said Koenen. She advises people to stick to a schedule and seek help if they’re feeling overwhelmed.

Phil Schmitter, pastor at Christ the King Catholic Church in Flint, Michigan, spends much of his time talking to shut-in and vulnerable parishioners. Some members of his predominantly African American parish have been infected with the virus and some have died, while others worry about how they’ll pay bills.

“I’ve found that people are really struggling and they’re getting more and more angry,” said Schmitter. He said he has been “talking people down” by phone or on Facebook.

“They’re stressed out and finding it hard to sleep ... they’re afraid to go out for groceries,” he said. Many are feeling cut off because they used computers at now-shuttered libraries to get news or find out about health care and other benefits.

Perhaps as a result of the emotional effects of physical and social distancing, the poll finds Americans saying they more regularly reach out to friends and family now than they did before the start of the outbreak.

Overall, 65% say they are communicating with friends and family by phone, text, email or online “basically every day” in the past month, compared with 54% who said they did that in a typical month before. About another one-quarter, 24%, say they are in touch a few times a week.

Sixty-nine-year-old Barbara Hanc of Dudley, Massacusetts is a widow who lives alone with three cats. She said she is grateful for good friends and neighbors who provide emotional support and virtual companionship during the shutdown.

“Just reaching out and talking to somebody makes you realize you’re not alone. There are people who love, support and care for you,” she said. “I have to look at it as, ‘This situation is temporary’ ... and I’m setting my sights on the future.”