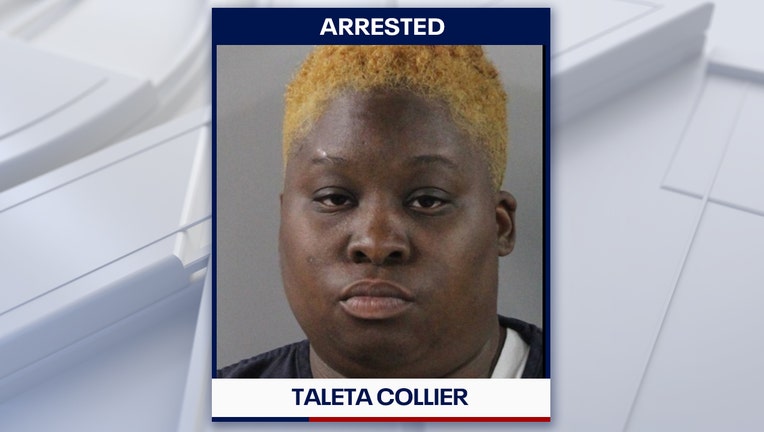 WINTER HAVEN, Fla. - A TSA officer who lives in Winter Haven had a habit of being late to work and recently lied about a burglary attempt, saying it was the reason she was tardy for another shift, according to Polk County deputies. When her supervisor asked for a case number, she created a fake sheriff's office report – and was later arrested for it.

On Monday, Polk County detectives arrested 34-year-old Taleta Collier. During the investigation, they said Collier was under an "improvement plan for excessive tardiness." On March 20, she called the TSA telecommunications office to say she will be late for her scheduled shift.

Detectives said when she arrived, Collier told her supervisor she was visiting her parents' home when a man armed with a knife attempted to burglarize their vehicle. She said she drew her agency-issued weapon and aimed it at the suspect, causing him to flee.

Collier advised that she filed a report with the Polk County Sheriff's Office, and her supervisor requested a case number. On April 3, detectives said Collier texted her supervisor a screenshot of a document that appeared to be a police report.

"Collier was then instructed to provide an actual copy of the report and not a picture of it, which she never provided," according to news release from the agency. "Collier’s supervisor told detectives that the image provided by Collier was cut off halfway through the second page and no incident description was visible."

On the following day, TSA contacted the sheriff's office. Detectives said after reviewing the screenshot, they said it was an "obvious fake" report. The form used to create the image was not an official sheriff's office document.

They said Collier used the name of a current Polk County deputy and his assigned member number was on the document.  It turned out the deputy was on vacation and out of the county at the date and time listed on the fake report.

According to the sheriff's office, the deputy said he didn't respond or create a report on the alleged burglary attempt.

Detectives said Collier's parents told them they "had no knowledge of a burglary report and that their vehicle had not been burglarized."

Collier was arrested for criminal use of a personal identification and uttering a false document.

"You can’t make this stuff up," Sheriff Grady Judd said in a statement. "I don’t understand why anyone would go to the extent of creating a fake police report to avoid a reprimand at work for tardiness. Collier has violated the trust of her coworkers and the people she was supposed to keep safe."