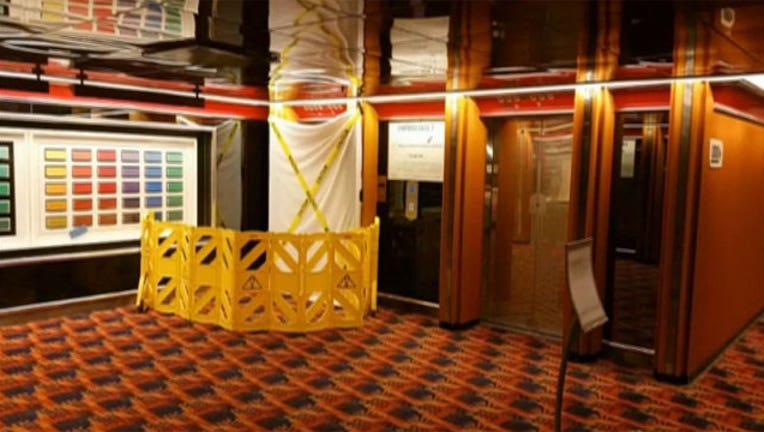 MIAMI (WOFL FOX 35) - The final night of a Florida couple’s Christmas cruise turned into a holiday horror as they discovered blood running down the doors of an elevator.  Matt Davis and his wife Susan made the shocking discovery on board the Carnival Ecstasy Sunday on their way to dinner. He said a supervisor on the cruise told him an electrician was killed.

"Somebody was inside or behind that wall when the elevator came down, and I don't know what happened, but something terrifying happened," Matt Davis told WFTX-TV. "To look and see the elevator with just blood coming down like a sheet, and not stopping... it was a real life scene of The Shining."

Miami-Dade police Det. Marjorie Eloi says 66-year-old Jose Sandoval Opazo of Liguria, Italy, died Sunday as a result of an apparent accident. In a news release, she said he was an electrician on the 2,056-passenger cruise ship.  The elevator was later sectioned off with a sign that read, "Sorry, but I'm not working at the moment."

In a statement, the Miami-based cruise line said the accident occurred on an elevator. Officials say Carnival's care team is providing support to Opazo's family.  The company says a full investigation is underway.

The couple said Carnival has offered to pay for them to go to counseling sessions.