The history of presidential debates in the United States

Debates continue to be a significant part of the presidential election process.

SALT LAKE CITY (AP) - The stage in Utah has been set with all the trappings of a modern political debate: Red, white and blue carpets, a backdrop of the Declaration of Independence — and plexiglass.

The clear partitions that will divide Vice President Mike Pence and Sen. Kamala Harris in Wednesday's vice presidential debate in Salt Lake City are a late addition that serve as a clear reminder that the coronavirus pandemic rages on less than a month before the Nov. 3 election. The two candidates will sit in desks spaced more than 12 feet (3.7 meters) apart, and each desk will have a partition on the side facing the other candidate.

The plexiglass caused a stir: Harris' team requested they be used after President Donald Trump was diagnosed with COVID-19 shortly after his first presidential debate against Democrat Joe Biden. Pence's team, meanwhile, insisted they were not medically necessary, an objection that came as Trump returned to the White House. The Trump campaign is trying to move past the virus despite the president's own diagnosis. 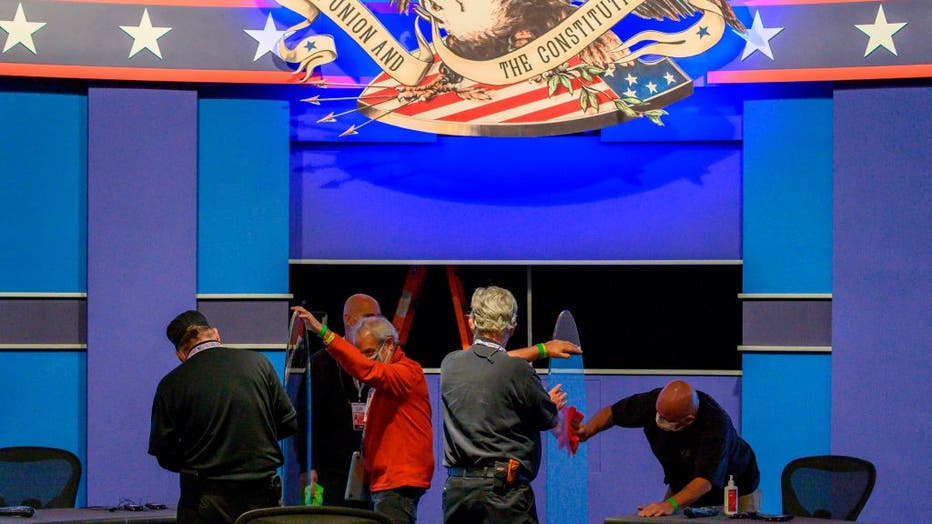 Workers install plexiglass protections between the debaters on the stage of the debate hall ahead of the vice presidential debate in Kingsbury Hall of the University of Utah October 6, 2020 in Salt Lake City, Utah.

Other reminders that these are not normal times for a vice presidential debate: 20 chairs for guests were spaced roughly 6 feet (1.8 meters) apart in the debate hall, a performing arts center on the University of Utah campus. The auditorium’s balcony was filled with university students, donors and other guests, who sat in traditional theater seats, though there were at least two empty seats between guests.

Staff took guests’ temperatures upon entrance into the hall and asked people to sanitize their hands. Wearing a mask was required. Even the network TV cameras had plexiglass wrapping on the sides and back.

A disclaimer on the back of the debate tickets said the “holder relieves” the event’s organizer, the Commission on Presidential Debates, as well as the debate’s “site host of any and all liability of any kind of character ... including COVID-19.”

The existence of barriers between Harris and Pence, meanwhile, did not extend to the moderator, Susan Page of USA Today. That served as a visual cue from Democrats that sharing the stage with Pence is the primary concern.

Both Harris and Pence tested negative for the virus on Tuesday, their respective teams said. A number of members of the Trump administration are continuing to test positive.

Pence’s guests in the debate hall were meant to convey a “law and order” message that has been a centerpiece of the Trump campaign. They included Ann Marie Dorn, the widow of retired St. Louis police captain David Dorn, who was shot and killed on June 2 after a violent night of protests. She also spoke at the Republican National Convention.

The vice president was also joined by Flora Westbrooks, whose Minneapolis hair salon was burned down in May during protests over George Floyd’s killing by police. Also there on Pence's behalf were the parents of Kayla Mueller, a humanitarian aid worker who was taken captive and killed by Islamic State militants.

More than an hour before the debate started, dozens of Trump and Pence supporters stood on the street outside waving flags and chanting, some holding anti-abortion signs. A long line of supporters of the Biden-Harris ticket, many cheering and waving campaign signs, also lined areas near the auditorium.