PHOENIX - Phoenix Mercury player and WNBA All-Star Brittney Griner has been jailed in Russia after vape cartridges were found in her luggage at a Moscow airport, according to multiple reports.

A Russian news agency reported that Griner could spend 5 to 10 years in prison on drug smuggling charges, according to the New York Post.

Reports say the Mercury player had been arrested after landing at Sheremetyevo Airport from a flight in New York back in February. A drug-sniffing dog reportedly detected "so-called ‘vapes…with a specific order," according to Russia's Interfax news agency.

Officials said that cannabis oil was found in the vapes, and Griner was reportedly detained as a "preventative measure."

"We are aware of and are closely monitoring the situation with Brittney Griner in Russia. We remain in constant contact with her family, her representation, the WNBA and NBA. We love and support Brittney and at this time our main concern is her safety, physical and mental health, and her safe return home."

Griner has been playing for the Mercury since 2013 and was part of the USA Olympic Women's team in 2016. She has been on the Russian team UMMC Ekaterinburg in the Euroleague during the offseason since 2015.

The basketball player has not posted on social media since Feb. 5.

WNBA fans are outraged after news broke that Griner was detained.

"It’s a little harsh," said Casey Rocke, also visiting from Chicago. "I mean it is harsh. I’m surprised that it’s going on."

Mills adds, "It’s crushing, actually. I think it’s clearly politics and I think that it’s a shame that our women basketball players are being held obviously for political reasons."

The Federal Customs Service of Russia released a surveillance video of Griner.

"Russian drug laws are very strict and so even though it might seem like only a little bit, the amount that she was bringing or is alleged to have brought, then it still could qualify under Russian law for being a significant amount," said Jacob Lassin, a postdoctoral research scholar at the Melikian Center at Arizona State.

Experts say the current Russian invasion of Ukraine could impact her case.

"Russia has dismissed the United States’ ambassador. Most embassy staff just isn’t there because of safety reasons because they’ve been forced out of the country, so it will make all of the things much more complicated," Lassin said.

'My hope is that this will get resolved fairly soon'

Some say the possible 5-10 year sentence is too harsh, while others think this is diverting attention away from Russia's ongoing war in Ukraine.

"My hope is that this will get resolved fairly soon, and she’ll be back home safe and sound," Turner Thorne said.

Adding, "The reason they play overseas is they make triple, even quadruple what they make in the WNBA even as the marquee players. So, I mean that’s the blessing. The curse of course is that’s a lot. Basketball is a contact sport. It is really hard on your body."

This is all happening at possibly the worst time, and it could impact her case.

American players began making plans to leave Russia after the country's invasion of Ukraine. The state department has warned Americans against traveling to Russia and has urged them to leave immediately.

"This comes at, you know, the most tense time in the relationship between Washington and Moscow since the end of the Cold War, and you know, it underscores the importance of the U.S. state department's message and calls on Americans in Russia to leave immediately," says Victor Peskin, associate professor in the School of Politics and Global Studies at Arizona State.

‘This may be a bargaining chip that may get her out …’

‘This may be a bargaining chip that may get her out': Lawyer speculates on WNBA star's Russian detainment

U.S. Secretary of State Antony Blinken commented, intentionally keeping his remarks vague, saying, "Whenever an American is detained anywhere in the world, we of course stand ready to provide every possible assistance and that includes in Russia."

Members of the Congressional Black Caucus say the Biden administration is working on trying to get Griner out of Russia.

A spokesperson for Arizona Senator Kyrsten Sinema told FOX 10, "Senator Sinema and her team continue to engage with the U.S. State Department to insure Ms. Griner is safe and has the appropriate support and assistance."

Griner's wife posted on Instagram today saying, "I miss your presence. You’re our person! There are no words to express this pain … we await the day to love on you as a family."

A lawyer who specializes in international law says her return won’t be simple.

"Assuming there was contraband in the bag, she’s committed a crime, and she has to face the consequence," says Frank Rubino, federal and international law attorney. "The fact that she is a prominent athlete doesn’t give her the right or any greater right than you or I."

This case is all happening at one of the worst times as Russia invades Ukraine, but Rubino says that may actually help her case.

"If we have wonderful, peaceful relations with Russia and everything was just wonderful, and she was an American citizen that committed a crime, well then she would get no special treatment at all, she would have a trial and in this case she would be convicted, and she would go to prison. This may be a bargaining chip that may get her out of that problem," Rubino speculated. 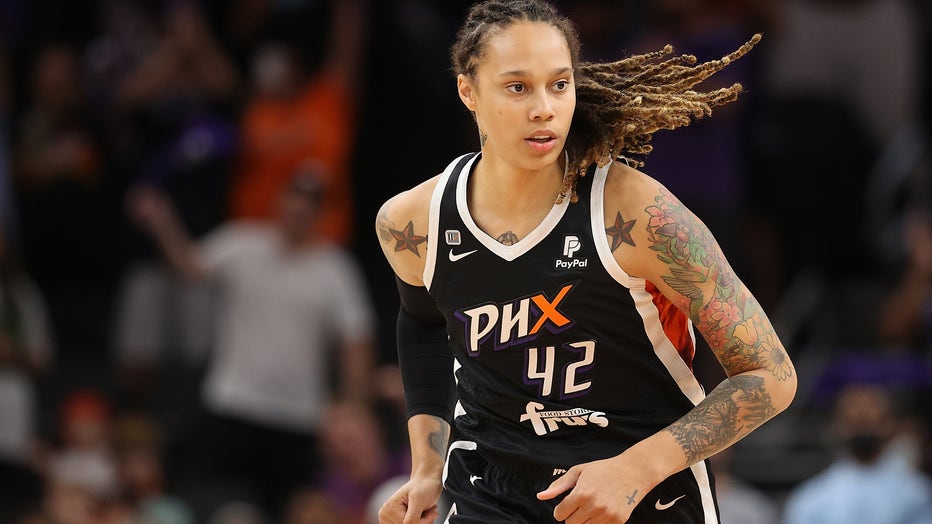 PHOENIX, ARIZONA - OCTOBER 06: Brittney Griner #42 of the Phoenix Mercury during the first half in Game Four of the 2021 WNBA semifinals at Footprint Center on October 06, 2021 in Phoenix, Arizona.