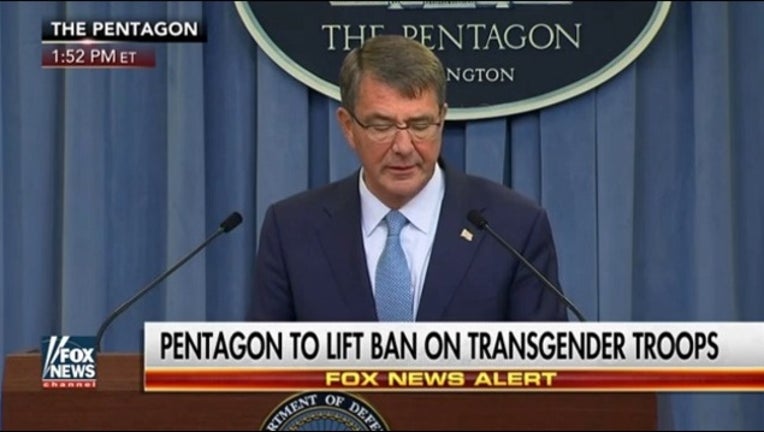 WASHINGTON (AP) - Transgender people will be allowed to serve openly in the U.S. military, the Pentagon announced Thursday, ending one of the last bans on service in the armed forces.

Saying it's the right thing to do, Defense Secretary Ash Carter laid out a yearlong implementation plan declaring that "Americans who want to serve and can meet our standards should be afforded the opportunity to compete to do so."

"Our mission is to defend this country, and we don't want barriers unrelated to a person's qualification to serve preventing us from recruiting or retaining the soldier, sailor, airman, or Marine who can best accomplish the mission," Carter said at a Pentagon news conference.

Under the new policy, by Oct. 1, transgender troops already serving should be able to receive medical care and begin formally changing their gender identifications in the Pentagon's personnel system.

A year from now, he said, the military services will begin allowing transgender individuals to enlist, as long as they meet required standards and have been stable in their identified genders for 18 months.

Carter's announcement comes despite concerns from senior military leaders that the department is moving too fast and that more time is needed to work through the changes. He said he discussed the plans extensively with his military leaders and that, based on their recommendations, he made adjustments to the timeline. He said he has been told that the services now support the timeline.

Under the new policy, transgender troops would receive any medically necessary care including surgery, Carter said.

The new rules also give military commanders flexibility, noting that not all transition cases are the same. Commanders will have the discretion to make decisions on a case-by-case basis, including on job placement, deployments, training delays and other accommodations, based on the needs of the military mission and whether the service members can perform their duties.

For people coming into the military, the plan says that those with gender dysphoria, a history of medical treatments associated with gender transition and those who have had reconstruction surgery may be disqualified as military recruits unless a medical provider certifies that they have been clinically stable in the preferred gender for 18 months, and are free of significant impairment. And transgender troops receiving hormone therapy must have been stable on their medications for 18 months.

The policy provides broad guidelines for transgender service members currently in the military. They will be able to use the bathrooms, housing, uniforms and fitness standards of their preferred gender only after they have legally transitioned to that identity, according to officials.

Over the next year, the military services will develop and distribute training guidelines, medical protocols and other guidance to help commanders deal with any issues or questions about transgender troops.

Last July, Carter said he intended to rescind the ban, calling it outdated. He has long argued that the military must be more inclusive to bring in the best and brightest.

At the time, he ordered a six-month study to include extensive medical and scientific research and discussions with other nations and companies with experience in the process. He extended the study because the military wanted more time. Officials said he wanted to insure there was no impact on military readiness, but over time, he became frustrated with the slow progress.

Rep. Mac Thornberry, R-Texas, the House Armed Services Committee chairman, called the announcement another example of the administration "prioritizing politics over policy. " He questioned whether the change would affect military readiness and said the committee will push for answers.

Others praised the move as historic. The decision, said Aaron Belkin, director of the California-based Palm Center think tank, enhances "readiness as well as core values of honesty and integrity, an enormous accomplishment with a durable impact on all service members."