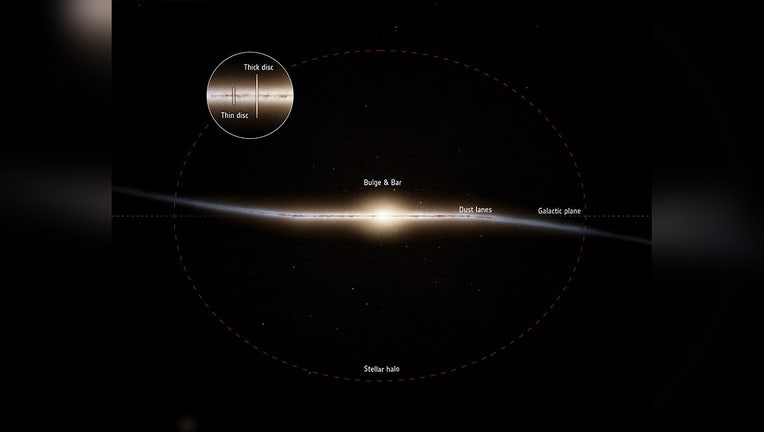 Basic structure of our home galaxy, edge-on view. The new results from ESA's Gaia mission provide for a reconstruction of the history of the Milky Way, in particular of the evolution of the so-called thick disc. (Stefan Payne-Wardenaar / MPIA via ESA)

Scientists have discovered that parts of the Milky Way galaxy are actually older than previously thought — at least by two billion years.

Data collected by the European Space Agency’s (ESA) Gaia mission was analyzed by astronomers from the Max-Planck Institute for Astronomy in Heidelberg, Germany, and compared to earlier datasets from Gaia’s observation of the motion of stars in the outskirts of our galaxy, also known as the anticentre, in 2020.

Combining this information, astronomers were able to determine that stars within the "thick disc" part of our galaxy began forming 13 billion years ago, around 2 billion years earlier than expected, and just 0.8 billion years after the Big Bang, according to the ESA.

So, our beautiful galaxy is made up of billions of components, but to keep things simple, we’ll narrow it down to the disc and the halo.

If one were to hypothetically look at our galaxy and it laid flat, you would be able to see a bulge in the center of the disc, which is essentially the center of our galaxy.

Surrounding that disc is the stellar halo, which is the outermost part of our galaxy and was originally believed to be the oldest part of the Milky Way, the ESA said.

The halo has a radius of about 100,000 light-years and contains isolated stars as well as many globular clusters, which are basically clusters of millions of stars packed into one area.

The galactic disc is made up of both thick and thin discs. The thin disc, which is about 700 light-years high in comparison to the galactic disc, contains most of the stars we humans can see. It’s often photographed as a misty streak across the night sky and dotted with stars.

The thick disc, which is about 3,000 light-years high, contains fewer stars but this is the area where astronomers were able to find their surprising discovery, thanks to Gaia, according to the ESA. 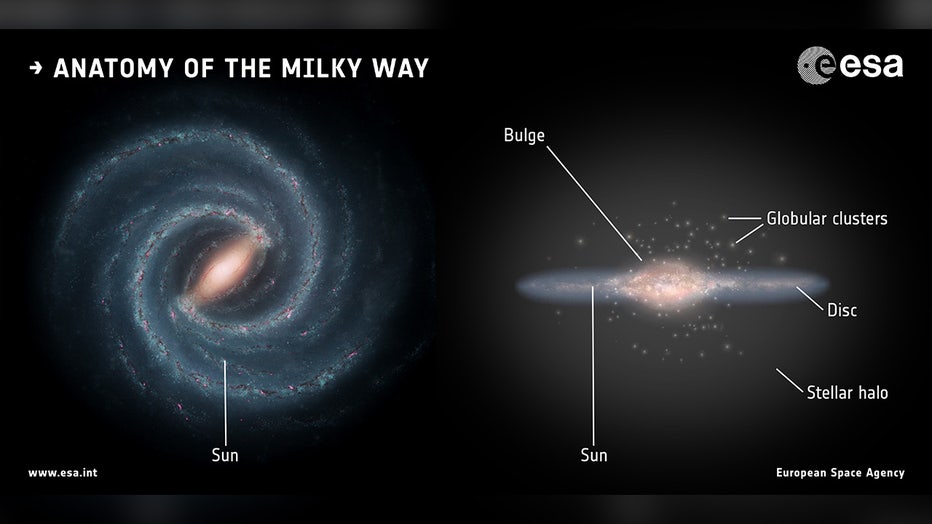 How do astronomers determine a star’s age?

Determining a star’s age is one of the most difficult things to decipher, according to the ESA.

"It cannot be measured directly but must be inferred by comparing a star’s characteristics with computer models of stellar evolution. The compositional data helps with this," according to the ESA.

Astronomers must take into account the matter of which a star is made in its early stages which includes hydrogen and helium. Once a star is born, it will continue to develop and create metals within itself. These metals are expelled out into space as a star grows older, according to the ESA.

So, to make a very complicated method easy to understand: The fewer metals a star has, the older it is.

"Together, the brightness and metallicity allow astronomers to extract the star’s age from the computer models," the ESA said.

How old is the Milky Way?

The Milky Way was formed in two phases, according to the ESA.

The first phase was the Big Bang which happened around 0.8 billion years ago, scientists believe.

Then, the Gaia-Sausage-Enceladus, which was a dwarf galaxy hurtling through space, collided with the Milky Way and rapidly accelerated the formation of our galaxy, according to Carnegie Mellon University.

This collision gave birth to millions of stars, according to the ESA.

During the second phase of the galaxy’s formation, a thinner disc developed as all of the space matter began to form together and that’s when Earth’s sun and subsequent planets were formed.