A military academy in Marion County has abruptly closed its door. Parents and students at Marion Military Academy said they feel left in the dark.

“I love this school,” student Samuel Watson said. “I want to keep it open. I want to say here. This is my home away from home.”

Students at Marion Military Academy went to school Monday and found out it was their last day there.

“We had no indication that something was going wrong,” parent Nicole Meade said. “So, none of us were given the option or the ability to even assist with anything.”

The school sent a letter to parents saying after being open for 11 years, the school was closing for good due to funding problems.  Students and parents are outraged and said they got no notice.  A group of them gathered outside the school to protest Tuesday. Teachers who worked there joined them.

“I think it shows how much they love their school and how it is their home like I said, they don’t want to leave it,” Marion Military Academy Senior Army Instructor Command Sergeant Major Mark George said.

The closure comes a day before the students go on a holiday break.  The school had an enrollment of approximately 200.  FOX 35 News reached out to the Marion County School District. A spokesperson said some of them are being re-enrolled. The district has also reached out to some of the staff to offer them jobs. 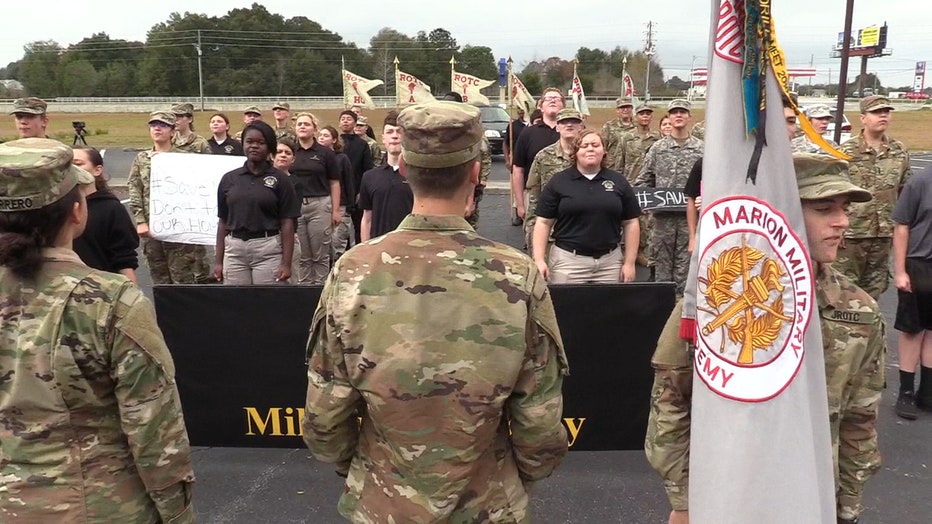 “Our grades are going to drop just because we’ve been out of school,” student Peyton Meade said. “We’re getting switched. We’re getting transferred.”

As the families begin to figure out their next steps, they hope this gathering shows the impact the school had on the kids.

“We teach the army values here: loyalty, duty, respect, selfless service, honor, integrity, and personal courage,” Sergeant Major George said. “We try to instill that in the cadets and I think it’s sad that the people in charge of the thing can’t live up to those values, because the way that they did this, they definitely didn’t live up to it.”

FOX 35 News tried to contact the school for comment on the closing but did not hear back.