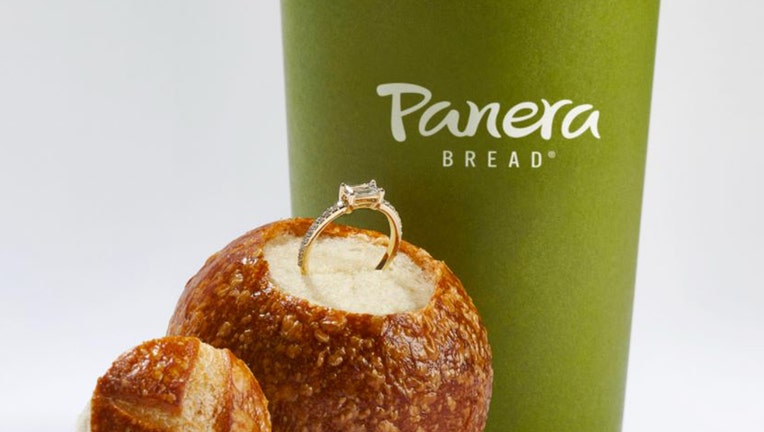 Panera is offering guests a chance to win a diamond ring and free year of coffee. (Credit: Panera)

ST. LOUIS - With Valentine’s Day just around the corner, Panera Bead is offering guests the chance to win the ultimate gift: a diamond ring, shaped in a baguette cut.

According to the bakery-café chain, fans will be able to enter, starting Feb. 14, for a chance to score a rock of their own, alongside a year subscription to Panera’s Unlimited Sip Club, which includes daily free cups of hot and iced coffee, as well as hot tea.

"What better way to perk up than with a fresh cup of Panera unlimited coffee in one hand and a baguette (diamond!) on the other?," the company wrote in a press release Tuesday.

Customers can enter for a chance to be one of 22 winners to score a year of free unlimited caffeine in addition to a gorgeous addition to their jewelry collection — a lab-grown, baguette-cut ring complemented by glistening, smaller stones packaged in a customized ring box inspired by Panera’s beloved Bread Bowl.

"This time of year can be filled with ups and downs and wins and losses - but Panera is always there to help fill your cup," said Drayton Martin, the vice president of brand building at Panera Bread. "The beautiful baguette-cut ring is an ode to our artisanal bread, which paired with our Unlimited Sip Club is sure to make our guests’ day shine a little brighter."

The bakery and restaurant chain launched its new grocery delivery service on Wednesday, allowing customers to restock their kitchen while ordering food.

In order to win, participants must send a tweet on the social media platform Twitter or create a post on the platform Instagram with the hashtags #PaneraDate and #Sweepstakes along with a photograph of your Panera Date. A "Panera Date" is considered a photograph of you enjoying your favorite Panera Bread cafe or Panera Bread products with yourself, a significant other, friends or colleagues.

But, Panera Bread isn’t the only company getting on the prize giveaways in February. Several businesses including Expedia and DiGionio are offering the chance to win big during Feb. 13’s Suber Bowl LVI.

The "it’s not delivery" frozen pizza company said the contest centers on pie — both pizza and pi, the mathematical constant that is approximately equal to 3.14159.

If the score — at any point of the Super Bowl — is 3-14 (or 14-3), DiGiorno says it will give away free pizza to lucky fans who enter the contest online here. Individuals can enter between Feb. 6 and Feb. 13 for a chance to score the free pie.

Those who win will receive a coupon redeemable for free DiGiorno pizza.

Meanwhile, Expedia announced it will be giving away 20 trips valued at $120,000.

According to the company, the prizes will all be inspired by commercials airing during the game at Los Angeles's SoFi Stadium between the L.A. Rams and Cincinnati Bengals.

The travel shopping company said the prizes will be in the form of Expedia Rewards points, with 19 of the prizes valued at $5,000 and a grand prize valued at $25,000.