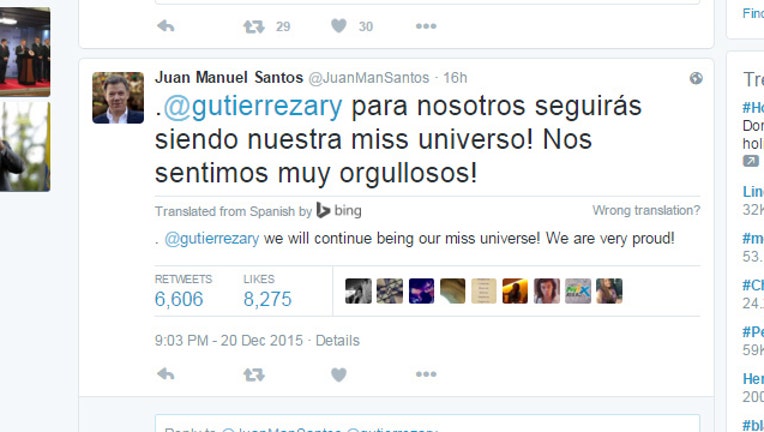 BOGOTA, Colombia (AP) — Colombians celebrated for a little more than two minutes what appeared to be an unprecedented feat for this beauty pageant-obsessed South American nation: back-to-back Miss Universe titles.

From President Juan Manuel Santos to Miss Colombia's relatives in the Caribbean port city of Barranquilla, millions of Colombians who tuned in for Sunday's pageant screamed joyously when it was announced that Ariadna Gutierrez Arevalo had won this year's crown.

But the celebrating turned to shouts of fraud seconds later as host Steve Harvey announced on live television from Las Vegas that he had mistakenly read from the cue card. The contestant from the Philippines was the new Miss Universe, not Miss Colombia.

"They took away her crown," and "the shortest reign in history" was the sentiment expressed almost universally on Twitter, where the hashtag "Respect the Crown" was the country's top trending topic.

"The entire country, and our family, was overcome with emotion," Alvaro Arevalo, the Colombian runner-up's cousin, told Blu Radio in an interview Monday. "The truth is we're a little shocked."

The sudden reversal even caught by the president by surprise, forcing him to reverse his initial celebratory tweet.

"I was watching Miss Universe with my family. We started a huge celebration when they said Colombia had won the Miss Universe title for the second straight year," Santos told Radio Nacional on Monday.

"They put the crown on her head. The photos are there to prove it. To me, as a Colombian, she is still Miss Universe," he said.

Colombians are obsessed with beauty and pageants are a major draw across social classes. But unlike neighboring Venezuela, which has won seven Miss Universe titles, Colombians are accustomed to falling short of the crown, with five runner-up appearances since 1992 including Sunday's.

Before last year's crowning of Paulina Vega, only one other Colombian had won the Miss Universe title, in 1958.

In the aftermath of Sunday's shocking finale, Colombians were at a loss to explain the mistake. Newscasts devoted almost 20 minutes to dissecting every detail of the pageant's confusing end — from the tweets by a member of the jury celebrating Gutierrez's win to a front-row audience member's alleged slipping of a cue card to Harvey — as reporters looked for clues of what many Colombians believe was a scripted ending to rob their country of its rightful crown and produce higher TV ratings.

Some journalists blamed Donald Trump, saying they could find no financial record confirming that he had indeed sold the rights to the pageant as he said he did in September.

Many Colombians were outraged months ago when Trump on the campaign trail accused Mexico of sending rapists and drug traffickers to the U.S. On Sunday, some said they believed the Republican presidential candidate was somehow still pulling the strings to prevent another Latina from being crowned.

Trump said Monday that he regretted the mixup, adding that it would never have happened under his watch.

"Mafias are everywhere. They stole the title," said Efrain Salinas, a doorman in a Bogota apartment building. "After winning last year's Miss Universe we're a beauty pageant powerhouse and nobody wants us to win again."

For her part, Gutierrez in her initial remarks seemed saddened but resigned to her fate.

"Everything happens for a reason," she said, wiping back a tear, in a backstage video posted on the organizer's website in which she also thanked the judges who voted for her.