Polk County Sheriff Grady Judd spoke about the arrest of one suspect and the search for two others who are all charged with felonies in a traveling asphalt paving scam.

WINTER HAVEN, Fla. - One man was arrested and two others are wanted in Winter Haven after they tried to perform illegal asphalt work on a convenience store parking lot, the Polk County Sheriff's Office said. A detective who specializes in spotting scams caught onto the suspects' scheme, according to the sheriff's office.

Back in January, the detective spotted the alleged scammers doing work in a parking lot on Spirit Lake Road. Their vehicles displayed out-of-state license plates, which was the first clue something was off, the sheriff's office said.

Detectives looked into the company, County Asphalt and Trucking, LLC, and found it was registered with a post office box address in Davenport. However, the company was owned by a man from Michigan, 36-year-old Raymond Wolk, III.

The investigation uncovered alleged victims who said they were approached at their homes or businesses and were pressured to let the suspects do paving work. 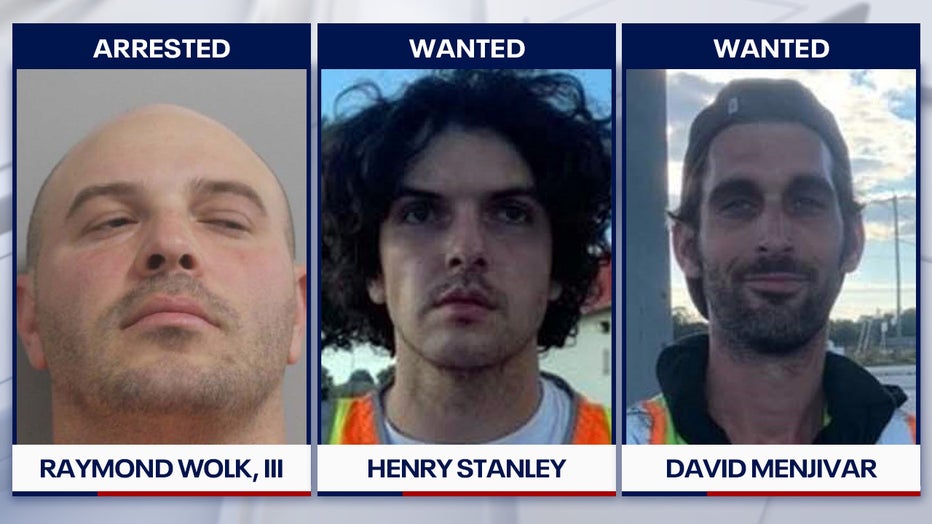 The convenience store owner said Wolk, along with 28-year-old Henry Stanley of New Hampshire and 31-year-old David Menjivar of Texas, asked for $5,000 to pave the parking lot. Then Wolk upped the charge to $7,000, the sheriff's office said.

"When the victim questioned this, he was told that Wolk wanted to cash it immediately and did not have a bank account in Florida. Detectives confirmed each of the financial transactions," the sheriff's office said in a media release.

Once the victims are coerced into paying the suspects, shoddy work is done and the suspects leave town. When law enforcement gets involved, they discover the suspects are not licensed to work in the state of Florida and don’t carry workman’s compensation insurance.

Stanley then instructed the victim to write a $7000 check payable to Wolk personally. When the victim questioned this, he was told that Wolk wanted to cash it immediately and did not have a bank account in Florida. Detectives confirmed each of the financial transactions.

Detectives said Menjivar also pressured another business owner on Spirit Lake Road to pay $5,300 for paving work. Investigators said soon after the work was done, it was clear the work had not been done properly and the asphalt began to deteriorate.

Henry Stanley and David Menjivar have Polk County warrants for their arrests, charging them with scheming to commit fraud, fraud, grand theft, and failure to secure worker’s comp insurance.

The sheriff's office said two more victims have been identified, but anyone who believes they may also have fallen victim to this scam should call the Sheriff’s Office at 863-298-6200 or to remain anonymous and would like to receive a cash reward for information leading to the arrest of a suspect, contact Heartland Crime Stoppers at 1-800-226 TIPS (8477).