Volunteers in Central Florida are stepping up to help victims of the deadly tornadoes in Kentucky.

A monstrous tornado, carving a track that could rival the longest on record, ripped across the middle of the U.S. overnight on Dec. 10 in a stormfront that killed dozens and tore apart a candle factory, crushed a nursing home, derailed a train and collapsed an Amazon warehouse.

The dozens killed across five states so far included at least 20 in Kentucky; six people in Illinois, where an Amazon facility was hit; four in Tennessee; two in Arkansas, where a nursing home was destroyed; and two in Missouri. The final death toll remained unclear, though it was expected to be lower than initially feared.

Disaster-aid and humanitarian groups are mobilizing to help victims and setting up dedicated funds for donations to support their efforts. 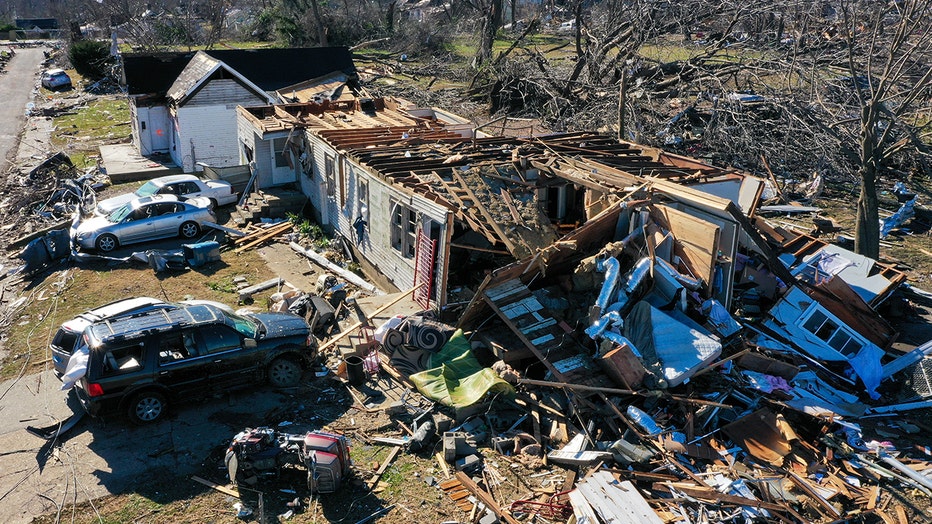 For example, the Red Cross confirmed to FOX 35 that one of its volunteers, Rene Leins from Orlando, will deploy to Kentucky to help those affected by the tornado.

They said that she will fly out on Monday afternoon has completed advanced health screenings and COVID-19 operating protocols.

Here's a look at some ways you can help relief efforts.

The American Red Cross is making it easy to send a quick $10 donation simply by texting "REDCROSS" addressed to the number, 90999. Other donations can be made by calling 800-733-2767 or visiting redcross.org online. Other information, including suggestions on how to find someone affected by the storm, can be found here.

The international aid organization CARE and its local partners are helping to provide immediate assistance to tornado victims including food, water and funding to families in need. Those who would like to make a donation to the cause can do so here.

Kentucky Gov. Andy Beshear announced the creation of a tornado relief fund for the western part of the state and also called on people to donate blood, which has been running in short supply during the pandemic.

As of Sunday afternoon, Beshear said the fund totaled more than $2.3 million.

The governor also said people in the affected areas can help by staying off the roads, whenever possible.

Kentucky Gov. Andy Beshear announced the creation of a tornado relief fund for the western part of the state and also called on people to donate blood, which has been running in short supply during the pandemic. The governor said the fund totaled more than $2.3 million, as of Dec. 12.

He added that people in the affected areas can help by staying off the roads, whenever possible.

The Salvation Army has set up a disaster relief fund for the tornado victims. Donations can made here or by calling 800-725-2769. It is also preparing to dispatch mobile kitchens that can serve 500 to 1,500 meals per day to the survivors and first responders in the affected areas.

Samaritan’s Purse, another humanitarian group, said it sent disaster response teams on Saturday to Mayfield, Kentucky, and Monette, Arkansas, while other teams started to head to the devastation in Tennessee and Illinois. A tractor-trailer stocked with tools and equipment departed from Texas, according to the group, with more help on the way from North Carolina when the weather allows. Donations can be made here.

World Vision, a Christian humanitarian group, plans to begin shipping relief supplies to churches in Kentucky beginning Sunday. Besides food and emergency kits, the supplies will include heaters, blankets, solar lights and mini-refrigerators. Donations to help support those efforts can be made here.

FOX TV Digital Stations and the Associated Press contributed to this report.