Orlando moms pay tribute to teen who fell off ride

Around 200 people attended a balloon release for a boy killed on an Orlando ride. His memorial continues to grow and even strangers are stopping the Orlando FreeFall attraction at ICON Park to pay their respects.

ORLANDO, Fla. - Editor’s note: Since this story was published, questions have been raised about the true identity of "Shay Johnson," who claimed to be Tyre Sampson’s cousin and was collecting signatures for a petition. Sampson’s family has told officials that they do not know Johnson and that she is not a member of the family. Johnson spoke to several media outlets, including FOX 35, and attended events and memories in honor of Sampson, claiming to be his cousin. No charges have been filed, according to the Orange County Sheriff’s Office.

Around 200 people attended a balloon release for a boy killed on an Orlando ride.  His memorial continues to grow and even strangers are stopping the Orlando FreeFall attraction at ICON Park to pay their respects.

As balloons were released in memory of 14-year-old Tyre Sampson, also known as Tray, his cousin Shay Johnson grieved the loss of a loved one.
Sampson was killed on the ride Thursday night. He was visiting the area from St Louis, but his aunt and cousin live in Orlando.

Tyre's aunt, Alvina Burch, says, "It’s devastating, shocking, overwhelming. The mom is like, she’s not doing so well right now. It’s taking a toll on her."

While Tyre’s mother was too devastated to attend the vigil, many mothers who never even knew the boy showed their support.

Community activist Tranise Brown says, "They’re not from here, but I feel it’s our obligation from Orlando, Florida to show the love that we have."

While Tyre was from St Louis, Mary Sims from nearby St Louis, in Illinois, says he talked about playing at the high school where she works. 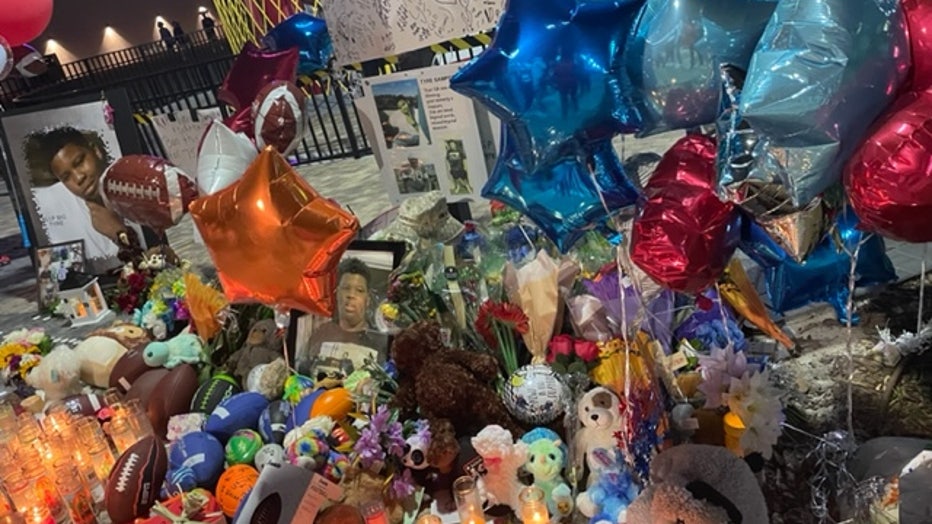 "He was supposed to possibly attend the high school in the school district that I work in. So we just felt that it was a family thing that we should come down."

Alvina says, "It’s a blessing to see this many people here. Because a lot of these people, they don’t even know them."

They’re also signing a petition to shut the ride down.

Shay says, "It’s really important, that’s why I want everyone out here to make sure they sign it so we can get these rides taken down."

Shay says she misses joking around with her cousin.

"Me calling him fat boy and him calling me mini-me because I was always shorter than him and I think that’s what I’ll miss the most."

But as strangers come with hugs and love, it helps heal the pain.

Tyre was a straight-A student who dreamed of playing in the NFL. The Medical Examiner says they released his body to a funeral home, as they work to bring Tyre back home to St Louis.