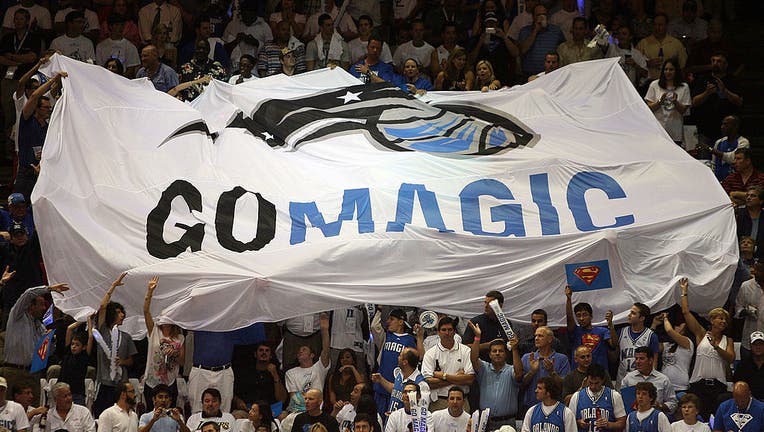 ORLANDO, FL - JUNE 09: Fans of the Orlando Magic hold a giant banner before Game Three of the 2009 NBA Finals against the Los Angeles Lakers on June 9, 2009 at Amway Arena in Orlando, Florida. NOTE TO USER: User expressly acknowledges and agrees that

ORLANDO, Fla. - After an unconventional season, playing games inside the ‘bubble’ at Disney World without fans, the Orlando Magic is getting ready for preseason.

The team will play its first preseason home game on December 17th.

“I think we’re all trying to figure it out together,” Orlando Magic player Aaron Gordon said. “You know, we want to keep everybody healthy and everybody safe, but, the show must go on.”

A spokesperson for the team said they’re working on a plan to allow fans in the stands during the regular season at limited capacity.

“We will use the preseason as a trial to assess and evaluate safety measures and protocols as outlined by the NBA, CDC and local health officials,” Orlando Magic Chief Communications Officer Joel Glass said. “We will continue to monitor the situation on a daily basis.”

As the Magic work on their plan, the NBA has released details about safety protocols for fans seated near the court. If you’re within 30 feet, you must take a coronavirus test.

Fans outside of the Amway say they’d be game for that.

“If we follow the guidelines, let’s do what’s right,” Magic fan Robert Hester said. “You know, if we’ve got to limit attendance. Yes. Get tested and move forward. As long as we do everything in order. We’ll be alright.”

As for the players’ health, Magic Head Coach Steve Clifford gave this message: