GREENSBURG, Pa. - Five people were killed and about 60 were injured on the Pennsylvania Turnpike early Sunday morning, when a loaded bus went out of control on a hill and rolled over, setting off a chain reaction that involved three tractor-trailers and a passenger car.

The injured victims, ranging from 7 to 67 years old, are all expected to survive, though two patients remain in critical condition, authorities and hospital officials said Sunday afternoon.

The crash, which happened at 3:40 a.m. on a mountainous and rural stretch of the interstate about 30 miles east of Pittsburgh, shut down the highway in both directions for several hours before it reopened Sunday evening.

Two UPS drivers, Daniel Kepner, 53, and Dennis Kehler, 48, were killed in the crash, company spokeswoman Kristen Petrella said. Both were driving together in a tractor-trailer out of Harrisburg, Pennsylvania, Petrella said. 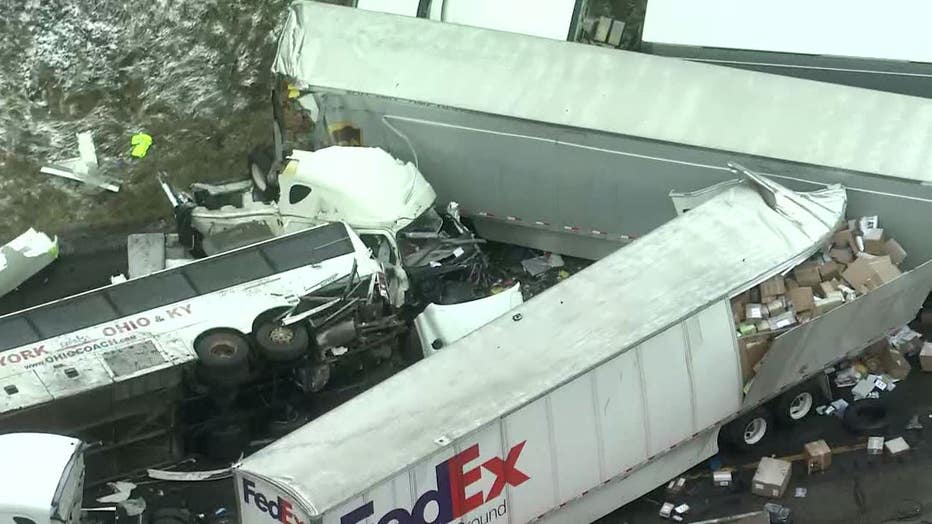 He said the bus, operated by a New Jersey-based company called Z & D Tours, was traveling downhill on a curve, careened up an embankment and rolled over. Two tractor-trailers then struck the bus. A third tractor-trailer then crashed into those trucks. A passenger car was also involved in the pileup.

Photos from the scene show a mangled collision of multiple vehicles including a smashed FedEx truck that left packages sprawled along the highway.

“It was kind of a chain-reaction crash," Limani said.

FedEx did not provide any other details besides that they are cooperating with authorities. A message seeking comment was left Sunday with the bus company.

“I haven't personally witnessed a crash of this magnitude in 20 years," Pennsylvania Turnpike spokesman Carl DeFebo told WTAE, calling it the worst accident in his decades-long tenure with the turnpike. “It's horrible."

Excela Health Frick Hospital in Mount Pleasant said it treated 31 victims, transferring a child and three adults to other facilities.

Hospitals brought in teams of social workers and psychologists to deal with the mental trauma, said Mark Rubino, president of Forbes Hospital, which treated 11 victims.

“The people coming in were not only physically injured but they were traumatized from a mental standpoint as well," he said. Most were covered in diesel fuel when they arrived. The hospital treated fractured bones, brain bleeds, contusions, abrasions and spinal injuries.

The victims included students and people returning from visiting family in New York City. Many traveling on the bus were from outside the United States, Limani said, some of whom do not speak English and who lost their luggage and passports in the wreckage. 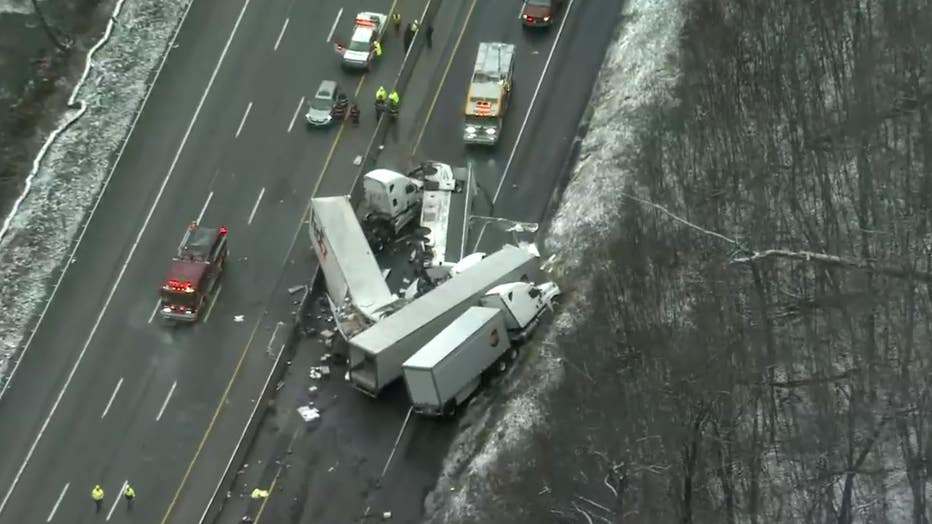 The Tribune-Review reported Leticia Moreta arrived at a hospital about 11:30 a.m. to pick up her children - Jorge Moreta, 24, and Melanie Moreta, 16 - who were on the bus.

She said her children, returning from visiting their father in New York, were in stable condition.

“I was devastated,” she said.

Exactly what caused the crash remains unknown, and Limani said it could take weeks or months to determine. The National Transportation Safety Board dispatched a team to investigate.

Officials said it was too early to determine if weather was a factor in the crash.

Angela Maynard, a tractor-trailer driver from Kentucky, said the roads were wet from snow but not especially icy. Maynard was traveling eastbound on the turnpike when she came upon the crash site and called 911.

“It was horrible,” she told The Tribune-Review. She saw lots of smoke but no fire. She and her co-driver found one person trapped in their truck and another lying on the ground.

“I tried to keep him occupied, keep talking, until medical help arrived," Maynard said. “He was in bad shape. He was floating in and out of consciousness.”

“I was crying,” said Omeil Ellis, whose two brothers were on the bus. “I was like crazy crying. I’m still hurt.”

Ellis, from Irvington, New Jersey, told The Tribune-Review that his brothers were traveling to Ohio for work. He was planning to meet them a few days later. But both of his brothers, one of them 39 years old and one 17, were sent to hospitals.