Woman whose rescue off Piestewa Peak in June went wrong files notice of claim, asks for $2m to settle claims

A woman whose rescue off Piestewa Peak in June went viral due to a basket that spun uncontrollably is asking for $2 million to settle her claims. FOX 10's Matt Rodewald reports.

PHOENIX - The woman whose rescue off Piestewa Peak in June went viral has filed a notice of claim against the City of Phoenix.

On June 4, the woman, identified in the notice of claims as Katalin Metro, reportedly tripped somewhere along the trail, became disoriented and needed help back down.

Metro, according to reports at the time, was wrapped up like a mummy and strapped in a so-called "stokes basket", and gently lifted off the ground. That was then she started to spin, slowly at first, then faster and faster, until she look like a human helicopter. The spinning subsided after a full 60 seconds.

Video of the rescue has been viewed over 23 million times on the FOX 10 Phoenix Facebook page.

"She was like (swings back and forth), you know?" said one woman hiker in a report by FOX 10's Brian Webb in June. "Like, it was real bad. It was scary."

"I kept watching and hoping, just hoping that something would stop it," said Metro's husband, George, during an interview with Mac and Gaydos on Phoenix-based radio station KTAR-FM. 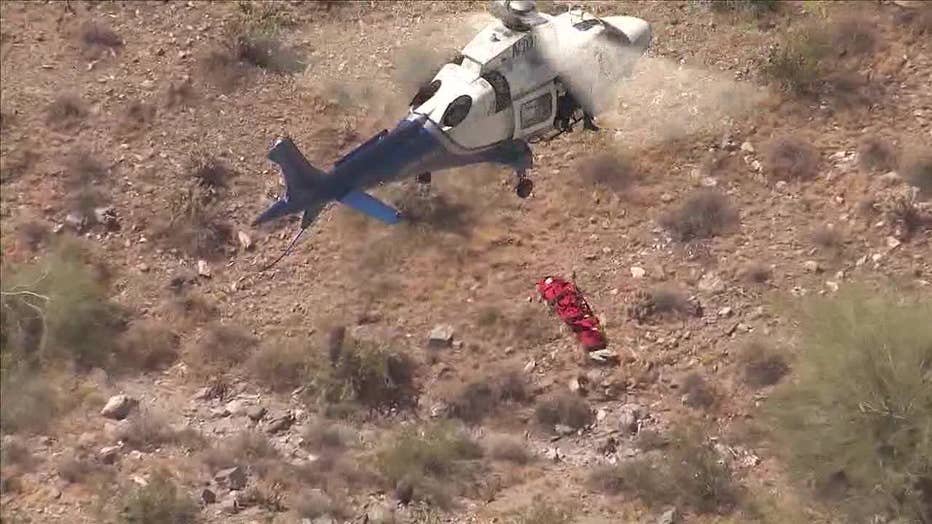 At the time, rescue crews held a news conference to explain how a person can turn into a pinwheel.

"As the basket comes up and hears the helicopter, the basket will start to interact with the rotor wash of the helicopter. That is when it tends to spin. It wants to windmill," said Paul Apolinar, a chief pilot with the Phoenix Police Department.

"She suffered no ill effect from that spin other than being a little bit dizzy," said Capt. Bobby Dubnow with the Phoenix Fire Department, in June.

The notice of claim filed Tuesday, however, paints a very different picture of what Metro experienced.

According to documents, it is claimed that Metro had expressed to first responders that she did not want to be taken off the trail by helicopter, and that Metro suffered physical, emotional and psychological injuries and damage as a result of the incident.

The claim also asserts that after Metro was taken to John C. Lincoln Medical Center, a doctor at the hospital noted that Metro had, among other things, swelling and bruising to bilateral eyes, blood in her external auditory canals, and soft tissue swelling over parts of the skull. In addition, Metro required surgery for a spinal cord injury.

Metro was transferred from John C. Lincoln to a rehabilitation unit at St. Joseph's Hospital and Medical Center on June 11, according to the claim, and was discharged from that hospital on June 28.

The claim states that in July, Metro began outpatient therapy, and tagged the medical cost in between June and July at over $290,000.

"Katalin Metro's injuries were caused or contributed to by the negligence, negligence per se, gross negligence, carelessness and/or other fault on the part of the City of Phoenix," read a portion of the notice of claim.

Metro's husband, George, was asked about her condition Tuesday.

The couple is reportedly willing to settle the claims for $2 million. Officials with the City of Phoenix say they cannot comment due to pending litigation.