FOX 35 News continues to investigate the tornado detection 'dead zone' where National Weather Service officials say their radars are unable to detect tornadoes that form close to the ground.

WILDWOOD, Fla. - A destructive EF-1 tornado touched down in Dunnellon and Ocala on Saturday causing severe damage. The storm lasting 35 minutes went on without a single warning. Since then, FOX 35 News has been working to find out why.

FOX 35 uncovered a 2017 report from the National Oceanic and Atmospheric Administration (NOAA) that makes it clear they are aware of this "Tornado Dead Zone" and have no intentions of making a change.

"We’re supposed to die in bed because those in charge decided not to set up a system that is giving us adequate warning? That’s absurd," said Dorinda Sears.

Dorinda Sears lives in the Villages. She is outraged over the NOAA report that acknowledges the lack of radar coverage in one of Central Florida’s fastest growing communities and there is nothing they’re going to do about it.

"Apparently those in charge don’t live in the Villages or anywhere around here, so they don’t have to worry about themselves," said Sears.

It goes on to say forecasters should use tools other than radar to send out life-saving warnings. The report states, "for tornadoes that result in deaths, damage, and injuries, trained forecasters are able to overcome aspects of reduced radar coverage, resulting in warning performance that shows no statistically significant difference between inside or outside the 6,000 ft."

This means an EF-5 tornado with winds up to 200 mph could be missed.

"Specifically the smaller spin up tornadoes. That’s the hardest to catch. The larger ones they can see that fairly clearly on radar, but, small ones like the one you experienced this weekend are hard to catch," said Sumter County Emergency Management Director David Casto. 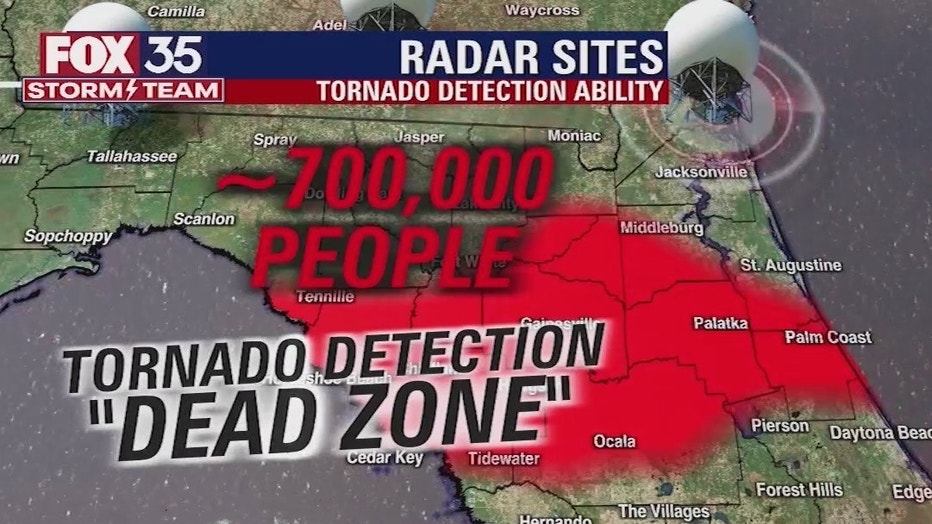 The "Tornado Dead Zone" includes parts of Marion, Sumter and Putnam counties where there is a lack of low level radar coverage to spot tornadoes.  On top of this, the Jacksonville radar that should cover that area is down for routine maintenance for another week.  That impacts more than 2.5 million people!

"It would be nice to have a closer radar, but that’s a Congressional act that has to happen because that’s a national program," said Casto.

Now the same area is preparing for another round of severe weather with limited tornado radar coverage. Many wondering, who is watching to keep their families safe.

"The little ones can kill. What difference does it make if you’re killed by a big one or little one? Your dead just the same," said Sears.

NOAA’s report puts emphasis on people on the ground to alert authorities of a twister. In Sumter County, they have a group of certified weather watches dedicated to spotting storms.

"They are the eyes and ears of the National Weather Service," said Cotes.

The volunteers of the RACES program. The group of about 20 volunteers are activated when a severe thunderstorm warning is issued

"They’re not storm chasers. They are just individuals that have an interest in weather," said Casto who oversees the program. "They’re trained specifically to look for certain features and severe weather. Specifically tornadoes."

If they spot any severe weather from hail and damaging winds to a tornado, they report it.

"If they can see a funnel cloud that may not be picked up, they are trusted agents so the National Weather Service will recognize that these are trained spotters, recognize their credentials and say OK this person knows what he’s talking about and issue a warning."

The RACES volunteers will be activated tonight for the storms. You can get updates on the storm from Alert Sumter or FOX35 Orlando.