Dr. Sarah Fortune, chair of the Department of Immunology and Infectious Diseases at the Harvard T.H. Chan School of Public Health, discusses superspreaders and their role in transmitting COVID-19.

Mardi Gars parades in New Orleans will be on hold for 2021, the city's website confirmed Tuesday.

The Louisiana city has officially announced that its annual parades, which were previously scheduled for January and February, will be canceled due to the coronavirus pandemic.

"Parades of any kind will not be permitted this year because large gatherings have proven to be super spreader events of the COVID-19 virus," the office further specified. 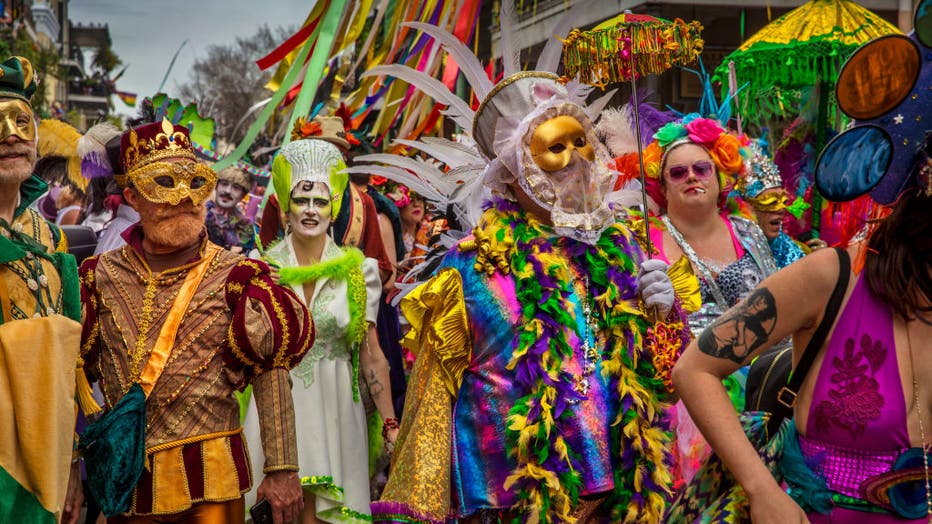 The Society of Saint Anne parade during Mardi Gras on Feb. 25 2020 in the French Quarter of New Orleans, Louisiana. (Photo by Barry Lewis/In Pictures via Getty Images)

News of the city's decision comes following speculation about whether the city's annual parades would be canceled, or at least drastically altered, amid the ongoing health crisis.

Bourbon Street and Frenchman Street entertainment districts are open, but are subject to local and state COVID guidelines. The city is also strongly urging revelers to maintain six feet of social distancing, and wear masks while in public at all times, officials said. What's more, capacity and business hours may be subject to change for social-distancing purposes.

Mardi Gras celebrations may still be permitted at home, though they are subject to state and local COVID guidelines.

Mardi Gras, or Fat Tuesday, draws around 1.4 million people into the Big Easy, and specifically the city’s historic French Quarter, every year. While the festival has strayed from its religious roots, the celebrations are generally treated as indulgences before the Christian observance of Lent begins on Ash Wednesday. In the weeks leading up to the holiday, dozens of parade organizations, or "Krewes," hold their celebrations across the city.

And New Orleans, which has become synonymous with the annual event, takes months to prepare for it, with its colorful purple, gold and green colored floats and lively costumes that draw tourists from around the globe. Indeed, a report released earlier this year from WalletHub found that New Orleans rakes in more than $1 billion during Mardi Gras.

After Hurricane Katrina devastated the city in 2005, New Orleans' first Mardi Gras celebration saw 700,000 people, according to statistics reported by WTVA. And the parades have been ongoing since the festival’s inception Feb. 24, 1857. Since then, Mardi Gras has only been canceled 13 times during wartimes.

As coronavirus cases continue to surge, a number of states are closing down areas of commerce they previously reopened following lockdowns in March and April. And some states keeping businesses open for economic purposes have imposed restrictions like mask-wearing mandates, capacity limits and limited hours of operation.