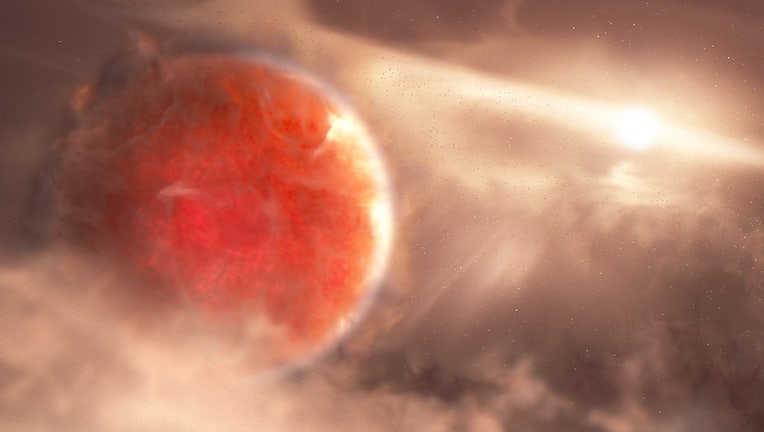 NASA’s Hubble Space Telescope has made a new discovery — directly photographing evidence of a Jupiter-like protoplanet forming through what researchers describe as an "unconventional" and "intense and violent process."

According to the space agency, this discovery supports a long-debated theory for how planets like Jupiter form — a process called "disk instability."

"In this method, instead of having a planet that grows and builds up from a small core accumulating matter and gas, the protoplanetary disk around a star cools, and gravity causes it to break up into one or more planet-mass fragments," NASA wrote in a press release Monday.

The newly forming planet, called AB Aurigae b, is probably about nine times more massive than Jupiter and orbits its host star at a distance of 8.6 billion miles – over two times farther than Pluto is from the Sun, according to NASA.

The agency says at that distance it would take a very long time, if ever, for a Jupiter-sized planet to form by another method called core accretion, leading its researchers to conclude that disk instability has enabled the planet to form at such a large distance.

"Nature is clever; it can produce planets in a range of different ways," offered Thayne Currie, a lead researcher on the study.

This new discovery combined data from two Hubble instruments: the Space Telescope Imaging Spectrograph and the Near Infrared Camera and Multi-Object Spectrograph.

"Interpreting this system is extremely challenging," Currie continued. "This is one of the reasons why we needed Hubble for this project—a clean image to better separate the light from the disk and any planet."

"We could not detect this motion on the order of a year or two years," Currie added. "Hubble provided a time baseline, combined with Subaru data, of 13 years, which was sufficient to be able to detect orbital motion."

The team says this discovery paves the way for future studies of the chemical make-up of protoplanetary disks like AB Aurigae, including with NASA's James Webb Space Telescope.

"This new discovery is strong evidence that some gas giant planets can form by the disk instability mechanism," Alan Boss of the Carnegie Institution of Science in Washington, D.C. emphasized. "In the end, gravity is all that counts, as the leftovers of the star-formation process will end up being pulled together by gravity to form planets, one way or the other."

This new evidence comes on the heels of another discovery made last week by Hubble’s telescope — the detection of the farthest individual star to date.

"We’ve certainly seen galaxies further away, but that is the new record-holder for the most distanced star that we know of," NASA astronomer Jane Rigby told FOX Television Stations Group.

The find is a huge leap further back in time from the previous single-star record holder, detected by Hubble in 2018.

Astronomer Brian Welch of the Johns Hopkins University in Baltimore and the lead author of the paper describing the discovery, nicknamed the star "Earendel"which means "morning star" in Old English. The paper was published Wednesday in the journal Nature.

The research team estimates that Earendel is at least 50 times the mass of our Sun and millions of times as bright, rivaling the most massive stars known.

Astronomers expect that Earendel will remain highly magnified for years to come. It will be observed by NASA’s James Webb Space Telescope, which launched in December.