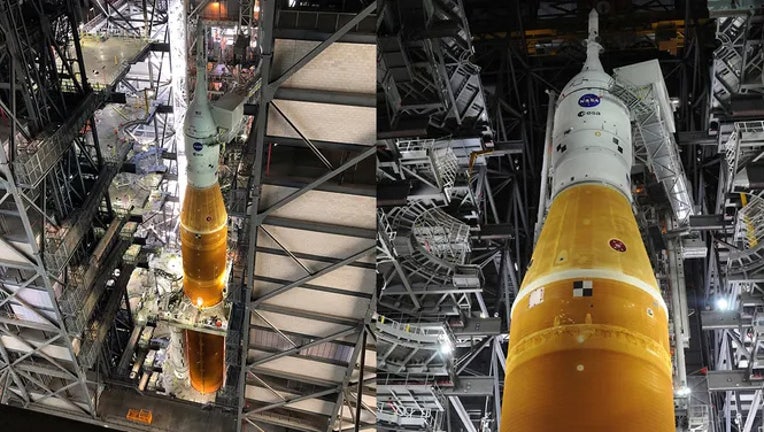 CAPE CANAVERAL, Fla. - Preparations are underway in Florida as NASA plans to roll out the Space Launch System, its 322-foot-tall moon rocket, to the launchpad for the first time this week.

The rocket known as the Artemis-1 is headed to Kennedy Space Center launchpad 39B for the first time, but it won't be leaving Earth, at least not yet. The roll to the pad is for a wet dress rehearsal when launch managers conduct all steps in the countdown except the liftoff. It's a critical end-to-end test for all teams that support the rocket, from running the launch countdown, fueling the rocket and testing ground systems.

On Monday, teams in the Vehicle Assembly Building continued to roll back the platforms surrounding the rocket body. Only two platforms are left supporting the Artemis-1 mission vehicle and Orion spacecraft.

The crawler-transporter 2 arrived outside the VAB over the weekend in preparation for the journey. The crawler will move the mobile launcher and Artemis-1 to launchpad 39B, taking about 11 hours to complete the 4-mile move at speeds between 1 and 2.8 mph.

Bolger estimated winds also need to be under 40 knots to begin moving the rocket.

NASA managers said they are targeting the rollout to start around 6 p.m. Thursday. Live views of the move will be available on KSC's YouTube channel beginning at 4 p.m.

Teams at KSC had been preparing to roll the rocket out of the VAB sometime in February to conduct a wet dress rehearsal. However, that shifted to mid-March due to an issue discovered with one of the rocket engine controllers.

As of the last update, NASA is eyeing launch dates between June 6 and 16.