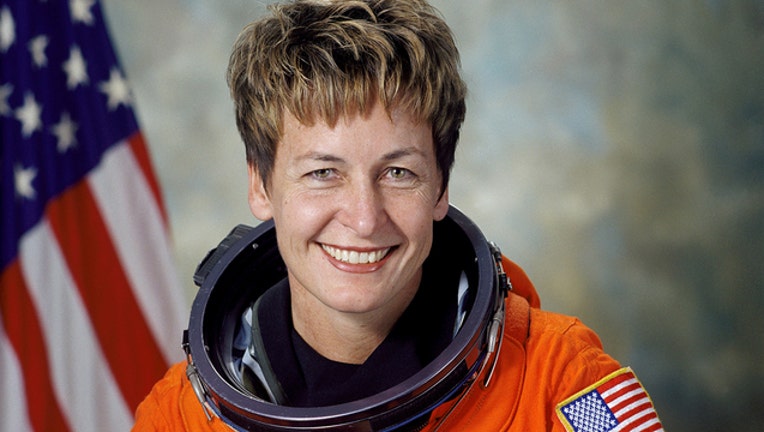 NASA astronaut Peggy Whitson is on the verge of becoming the oldest woman in space, adding to her long list of barrier-breaking records.

CAPE CANAVERAL, Fla. (AP) - NASA astronaut Peggy Whitson is on the verge of becoming the oldest woman in space, adding to her long list of barrier-breaking records.

Whitson will be 56 when she rockets off the planet Thursday. She'll celebrate her 57th birthday in February on the International Space Station.

That's a far cry from John Glenn's space shuttle flight at age 77 and a few years shy of the male runners-up. But it's enough to beat Barbara Morgan's record as the world's oldest spacewoman. Morgan waited so long to fulfill her role as Christa McAuliffe's teacher-in-space backup that she was 55 when she finally flew in 2007.

This will be the third space station mission for Whitson, an Iowa-born biochemist, and her second stint as commander. She'll launch from Kazakhstan with two younger men, Russian and French. They'll join an American and two Russians at the space station.

"It is a great place to work and live, and I feel really lucky that we are going to be with friends while we're there," Whitson said Wednesday at the traditional day-before-launch news conference.

"Even if I'm just cleaning the vents in the fans, it all is important."

Whitson was the first woman to serve as commander of the space station — in 2007, nine years into its lifetime. She also was the first — and so far only — woman to head NASA's male-dominated astronaut corps. No other woman has spent more time in space.

Strict when it comes to lifetime radiation exposure, NASA insisted Whitson remain Earth-bound for a while after her last mission.

"I would have rather gone sooner, but I'll deal with it," she said over the summer.

She'll ride a Soyuz rocket with a Russian cosmonaut, Oleg Novitskiy, 45, and a French newcomer to space, Thomas Pesquet, who's 38.

"Dear Peggy, you're such a brave woman who has won over hearts of all Baikonur residents," city administrator Anatoly Petrenko said during a ceremony Wednesday. "I admire you. All the best at launch."

During training, a French documentary crew followed Pesquet, focusing on his relative youth and fresh eyes. Whitson said the interest on her, by comparison, was for being "old and experienced."

"All right, yes, I'm old," she said in a NASA interview. She noted in a recent series of preflight interviews that it gets easier with age, knowing what to expect on a spaceflight and how to prioritize.

At Wednesday's press conference, Whitson said that while she'll miss her friends and family — biochemist husband Clarence Sams also works for NASA — probably the biggest challenge is the lack of variety in space food.

"There will be French food this time," Pesquet assured her. He and his crewmates will enjoy dishes whipped up in advance by top chefs; Pesquet said he'll prepare the New Year's feast.

Whitson already has spent 377 days in space and performed multiple spacewalks. Her upcoming six-month mission should push her beyond 534 days in space, the U.S. record set in September by 58-year-old astronaut Jeffrey Williams.

Whitson said she's had a lucky run with few regrets. But she told reporters last summer: "In terms of goals for NASA before I die, we need to be living on Mars. And I might not live that long, so they better get with it!"