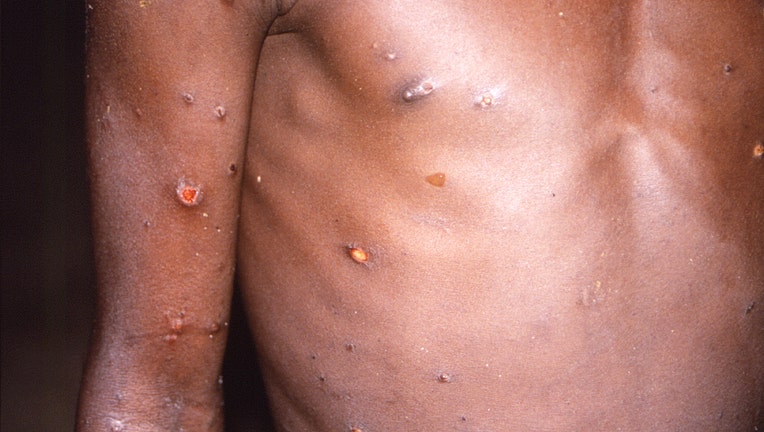 Right arm and torso of a patient with lesions during an active monkeypox infection, in the Democratic Republic of the Congo, 1997. Courtesy CDC/Mahy et al. (Photo via Smith Collection/Gado/Getty Images)

The Florida Department of Health said an additional two cases of Monekypox have been confirmed in Central Florida, bringing the number of local cases to three.

Monday's data shows there are now two cases of the rare disease in Orange County and one in Seminole County.

No other information has been released about the new cases.

Right now, the total number of cases in Florida are 16, with 13 of them being reported in South Florida, health department data shows.

Health officials said monkeypox is caused by a virus that occurs mostly in central and western Africa but also occurs in other parts of the world. The virus can be transmitted from wild animals like rodents and primates to humans, and once a person becomes infected, they can also pass it to other people.

MORE: Monkeypox symptoms to watch for

The health department said the disease isn't very contagious, and the risk of contracting it is typically low.

The virus reportedly begins as a rash and then turns to bumps that become infected.

Experts with the Centers for Disease Control and Preventions said the illness begins with:

Within 1 to 3 days (sometimes longer) after the appearance of fever, the patient develops a rash, often beginning on the face then spreading to other parts of the body.

Lesions progress through the following stages before falling off:

RELATED: WHO will rename monkeypox virus to counter concerns over stigma, discrimination

The illness typically lasts for 2−4 weeks. In Africa, monkeypox has been shown to cause death in as many as 1 in 10 persons who contract the disease, according to the CDC.

It is rarely seen outside of Africa.

Different from COVID, experts say it is harder to transmit. It generally requires close physical contact or bodily fluids.

Right now there is no treatment for monkeypox. Experts say if there is an outbreak, the smallpox vaccines may be used to slow the outbreak, because the viruses are genetically similar.