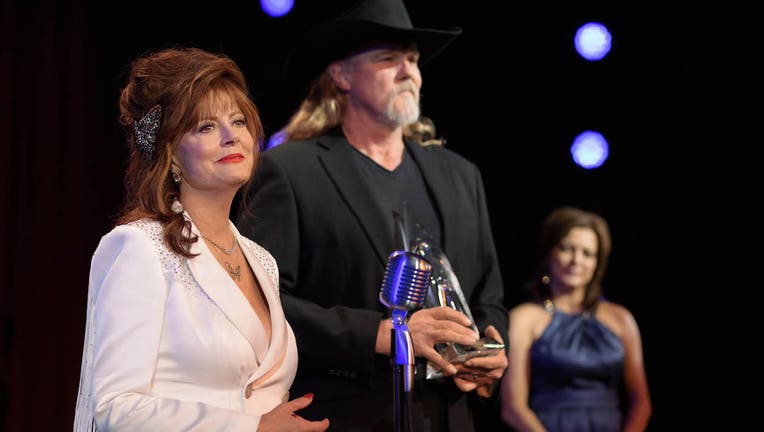 Chicago - Say hello to the "first damn family" of country music! After a long-awaited premiere, FOX’s soapy new country music drama "Monarch" is finally here. And this multigenerational family saga is basically "House of the Dragon" with guitars, "Succession" with rhinestone cowboy boots or "King Lear" by way of Reba McEntire (as played by Susan Sarandon).

"A Roman never forgets a friend — or an enemy," Albie Roman (bona fide country star Trace Adkins) intones in the premiere’s ominous opening moments. And that sets the stage for an episode that blends music industry drama, petty family squabbles and barn fire mysteries all under one diamond-studded cowboy hat. Oh and did we mention there’s a potential murder and a musicale? Read on to learn what went down in the show’s series premiere — or watch for yourself On Demand, on FOXNow or on Hulu.

Putting the drama in dynasty

At its heart, "Monarch" is a show about legacy. Glamorous, tough-talking Dottie Roman (Sarandon) and her husband Albie have spent the past 40 years as the king and queen of country music — dubbed "the Texas truth-teller and his rose." But shortly before receiving their CMA Lifetime Achievement, news leaks to the press that Dottie is dying of cancer. With the little time she has left, Dottie is determined to ensure she leaves behind a dynasty that will outlive her — within her family, within the country music scene and at her successful family-owned record label Monarch.

WATCH FREE ON TUBI: Susan Saradon in "Bull Durham" — get the app

Thankfully, she’s got three adult kids who seem perfect for their respective roles: Her daughter Gigi (Beth Ditto) is a loving family woman who stays out of the spotlight. Her son Luke (Joshua Sasse) is Monarch’s forward-thinking CEO who specializes in wooing up-and-coming new talent. And her ambitious daughter Nicolette a.k.a. Nicky (Anna Friel) has been preparing her whole life to step into her mom’s role as the next great country music queen. With Albie around to keep the family in check, what could possibly go wrong? 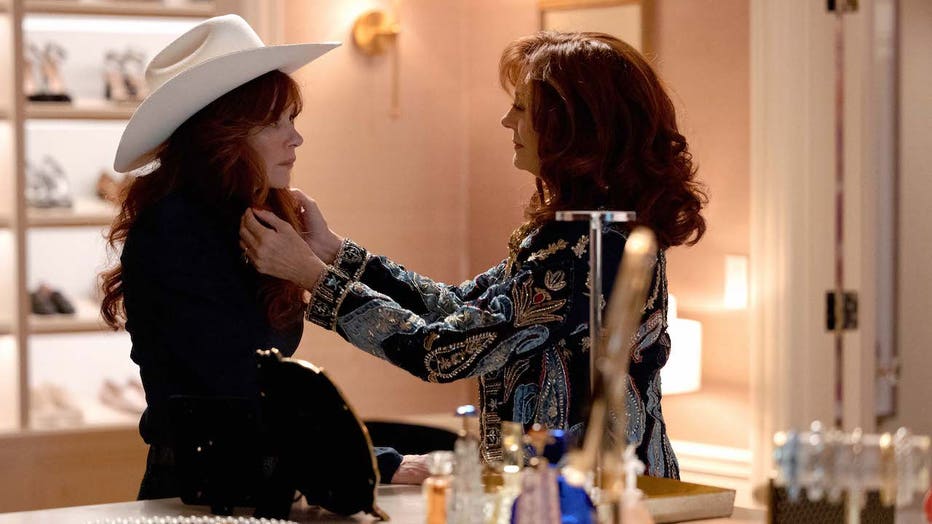 A lot, it turns out, as this premiere slowly reveals. The Romans may look like a picture perfect, mega-wealthy Texan family on the outside, but there’s a lot of drama lurking behind the scenes, both personally and professionally. The first truly gasp-worthy scene comes when Nicky lightly threatens her entitled, adulterous British actor husband Clive (Adam Croasdell) with death-by-bathtub-electricution. But that’s nothing compared to the reveal that Luke is having an affair with Gigi’s wife Kayla (Meagan Holder). Talk about keeping it in the family...

There’s also the fact that Dottie’s tour promoter isn’t so sure Nicky can really fill her mom’s country music shoes, especially not as a solo act. Oh and terminally ill Dottie also asks Nicky to help her end her life on her own terms. "I want to die the way I live," Dottie explains, "with a smile on my face and flawless hair."

All those various plot threads come to a head at the Roman family’s big annual musicale event, where Nicky plans to prove herself as a solo act and Dottie intends to enjoy one perfect final night before taking her life. And while the episode does end with Dottie passing away in bed of an intentional overdose, things don’t exactly go to plan.

For one thing, what starts out as a supportive sister duet quickly builds into a queenly rivalry after Gigi wows the crowd with her vocals and then reveals that the only reason she’s stayed out of the spotlight is because she didn’t want to risk outshining Nicky. (A concern that was maybe warranted, given the way Dottie’s tour promoter immediately dubs Gigi "the future of country music.") 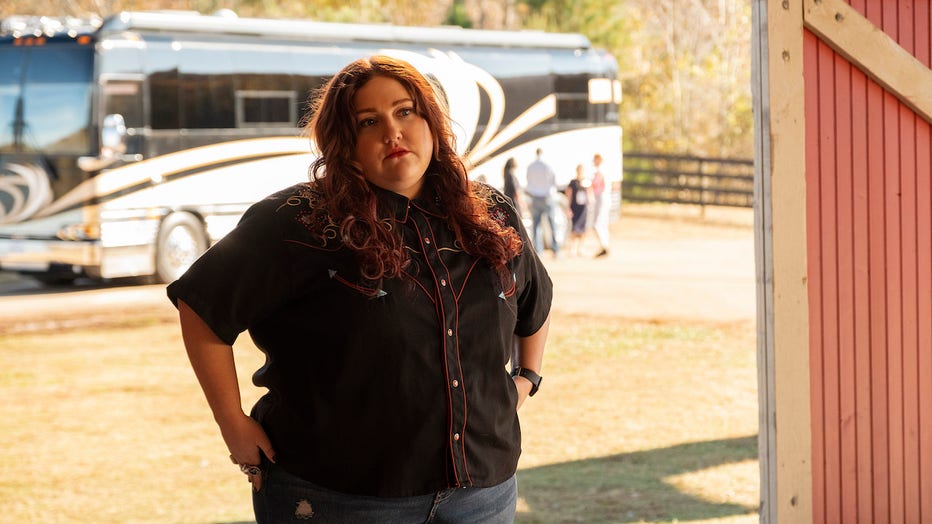 Dottie, meanwhile, spends the final moments of her life delivering a cryptic deathbed confessional: "I’m not your father’s rose," she frantically tells Nicky. "I’ve done things that can never be forgiven."

Given the look on Gigi’s face when she sees Nicky standing over their dead mom with an empty bottle of pills in her hand, it seems like forgiveness is going to be hard to come by for all the Romans.

Speculation corner: Secrets of the past, present and future

Like any good soap opera, the "Monarch" premiere also teases several big mysteries — including one in the past, one in the present and one in the future. The most shocking is a bookending sequence set three months after the musicale, where Albie drives out into the middle of nowhere, fires a shot gun at something (or someone) and is later seen burying a dead body in the middle of the night. But who could it be and why are they dead?

WATCH FREE ON TUBI: Trace Adkins stars in "Stagecoach: The Texas Jack Story" — get the app 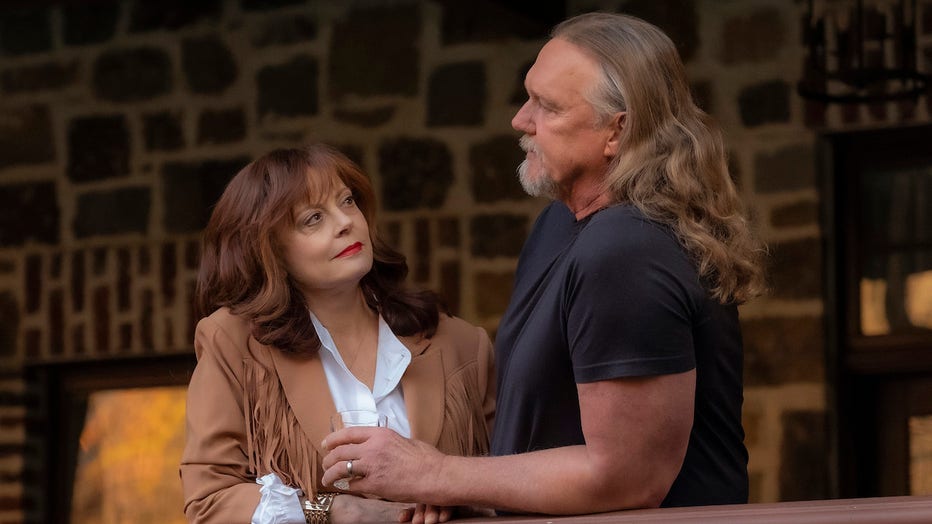 We also learn that Dottie may have had some extra motivation to take her own life: She’s been paying off someone nefarious in monthly installments that are set to extend for the rest of her life — all in the hopes of getting back some mysterious documents after she’s gone.

The most abstract mystery, meanwhile, involves a barn fire that happened 40 years ago, back when Dottie and Albie were a newly married couple who had just moved into their big country home. It seems like the fire is something Dottie intentionally set (it’s what she thinks of in the final moments before her death). And it might have something to do with Albie’s one brief bout of infidelity. After the musicale, Albie confesses to Dottie that the one time he strayed from their marriage was to have an affair with the property’s young caretaker, which ended when she took off after the barn fire.

Given that Dottie reveals she knew about the affair the whole time, could she have started the fire to threaten her husband’s beau? Also, what are the odds that Albie’s former mistress shows up later in the season with a fourth Roman half-sibling in tow? Is that who he’s burying in the ground?!? 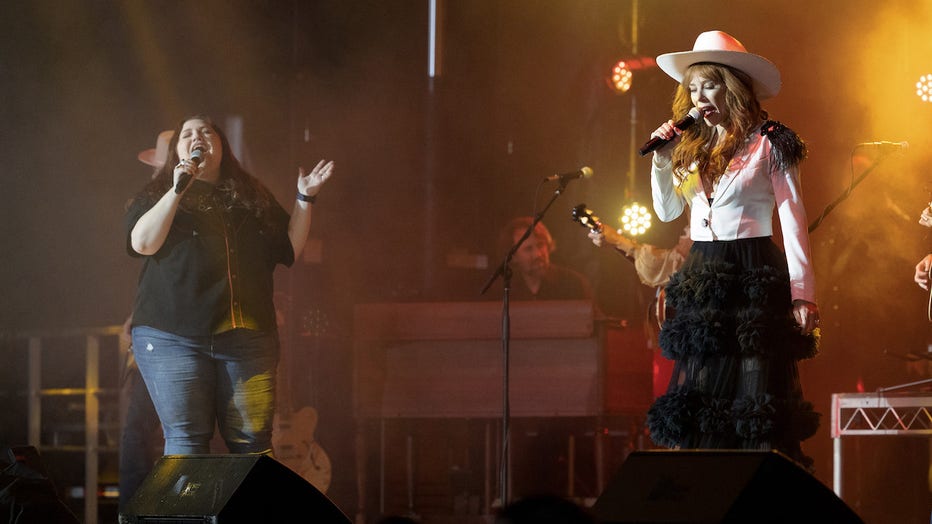 This premiere is jam-packed with country music performances, and there are no shortage of contenders for the top spot — from Nicky’s opening performance of the catchy original song "American Cowgirl" to Albie’s heartfelt ballad "The Brambles" to Luke’s delightful rendition of Hank Williams, Jr.‘s "Family Tradition." But if you didn’t get chills watching Gigi surprise Nicky onstage to duet on LeAnn Rimes’ "How Do I Live," well, what kinda life would that be.

WATCH FREE ON TUBI: LeAnn Rimes in "Coyote Ugly" — get the app

Continue the music tributes with "Gone Before Her Time: When The Music Stopped," streaming free on Tubi

Gone Before Her Time: When The Music Stopped (2022): This two-hour music documentary special celebrates the influences, controversies and legacies of four iconic female performers whose lives tragically ended at the peaks of their careers — vocalists so big, we only need their first names to conjure their music in our ears: Amy (Winehouse), Aaliyah (Dana Haughton), Left Eye (Lopes) and Selena (Quintanilla-Perez). "Gone Before Her Time" is a Tubi Original. Rated TV-14. 87 minutes. Documentary.

"Gone Before Her Time: When The Music Stopped" is streaming free on Tubi — get the app