What happened in the Mollie Tibbetts case

Mollie Tibbetts was a 20-year-old student at the University of Iowa when she was stabbed to death in 2018.

DAVENPORT, Iowa - The man on trial for the murder of Mollie Tibbetts, a University of Iowa student stabbed to death in 2018, testified for the first time on Wednesday that two armed, masked men were responsible for the crime but forced him to take part.

The defense called Cristhian Bahena Rivera as a witness in a surprise development. The 26-year-old answered questions through a translator from his defense attorney Jennifer Frese, who has sought to paint him as a hard-working, family-centered immigrant from Mexico who was pressured into making a false confession.

Bahena Rivera is charged with first-degree murder. Tibbetts, 20, vanished while out running on July 18, 2018, in Brooklyn, Iowa, and investigators recovered her partially naked, decomposing body from a cornfield a month later.

Prosecutors have used the DNA evidence, surveillance video showing Bahena Rivera’s Chevy Malibu driving near where Tibbetts was running, and the suspect’s partial confession to build their case.

But Bahena Rivera presented a far different narrative about what happened than investigators and prosecutors have alleged. He admitted that she ended up in the trunk of his car and that he hid her body in a cornfield, but he denied that he was responsible for the stab wounds to Tibbetts' head, neck and chest that caused her death.

An Iowa jury hears the prosecution's opening statement in the trial of Cristhian Bahena Rivera, who is accused of killing Mollie Tibbets in 2018. The defense opted to defer their opening statement to the conclusion of the state's case.

He testified that two armed men entered his home on the evening of July 18, dressed in dark clothing and their faces covered, after he finished taking a shower. He said one had a gun and the other a knife, and they ordered him into his car.

Bahena Rivera said they forced him to drive into town where they saw a woman jogging — who he now recognizes was Tibbetts. He testified that the men ordered him to stop the car, and the man with a knife got out and was gone for "10 to 12 minutes." The second man stayed in the back seat of the car and grew nervous, saying, "Come on, Jack," he claimed.

The defendant said he didn't know the men's identities, but his lawyers have tried to raise suspicions about Tibbetts' longtime boyfriend, Dalton Jack, who admitted to an affair with another woman and past anger problems. Police said they cleared Jack as a suspect after establishing he was out of town for work that day.

Bahena Rivera told the jurors that he later heard the two men loading something into the trunk and that they ordered him to drive for several miles until they reached a rural area near cornfields.

Bahena Rivera claimed that the two men then got out of the car, told him to wait a few minutes and then leave. He described how the two masked men said "they knew Iris (Gamboa)," who is the mother of his daughter, and his daughter — and "that if I said something, they would take care of them."

He testified that he knew something was in the trunk, and that he put her body in the cornfield after seeing no signs of life. He said he covered her body with corn stalks because "I didn't want her to be too exposed to the sun," and that he then left and never planned to discuss what had happened again.

Bahena Rivera said he left Tibbetts' phone, Fitbit and earbuds on the side of the road. 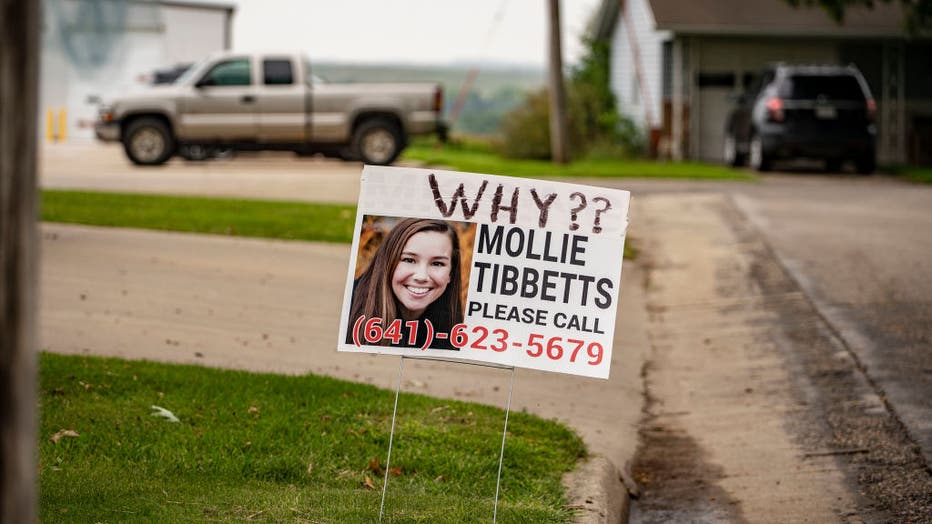 A sign seeking information about Mollie Tibbetts, with "WHY??" written above, stands in a yard in Brooklyn, Iowa on August 24, 2018. (Photo by KC McGinnis/For The Washington Post via Getty Images)

When asked why he didn’t call the police or let investigators know what happened, Bahena Rivera said he was scared and was worried about his daughter's safety. When questioned on Aug. 20, 2018, he said then that had approached Tibbetts as she ran, fought with her after she threatened to call police and then "blacked out" before hiding her body.

He said he agreed to lead investigators to Tibbetts' body early on Aug. 21 because he was tired and wanted the interrogation to end. And he said police had urged him to "put myself in the family's position and to think of" how he would feel if his daughter was missing.

Bahena Rivera also recounted growing up in southern Mexico and illegally coming to the U.S. after he turned 17, crossing a river into Texas on an inflatable raft with about 10 other people. He immediately went to live in Iowa, where his father’s brothers had settled, and got a job within days milking cows at a dairy farm, he said.

Bahena Rivera said he worked 12-hour days and was careful to avoid police for fear of deportation. He said never had contact with law enforcement until investigators looking into Tibbetts' disappearance identified his vehicle on a homeowner's surveillance video on her running route.

Most legal experts didn't expect Bahena Rivera to testify, and his defense gave no indication that he would. His lawyer Chad Frese said during jury selection that he was torn on whether to call his client as a witness. He said that if Bahena Rivera didn't testify, it would look like he had something to hide, but that if he did, he might be seen as trying to save himself.

Jurors perked up in their seats as Bahena Rivera took the witness stand, and prosecutors furiously took notes during his testimony. Bahena Rivera showed little emotion but his voice dropped and slightly trembled as he discussed the men's alleged threats to his daughter.

The trial, which started last week, is being held at the Scott County Courthouse in Davenport. Bahena Rivera faces life in prison if he's convicted.

In his lawyer’s opening statement on Tuesday, Frese said their hearts break for Tibbetts, but that authorities conducted an incomplete investigation into her death and were too quick to close the case.

The defense has questioned the confession and DNA evidence, and painted Bahena Rivera as a non-violent family man who crossed the border illegally from Mexico as a teenager in search of a better life.

Investigators said Bahena Rivera confessed during an 11-hour interrogation. They say he led them to the body, which was badly decomposed and hidden underneath cornstalks. Tibbetts’ DNA was found on blood spots on the rubber trunk seal and trunk liner of the Malibu.

The jury including three alternates is comprised of 12 White people and three of Hispanic, Latino or Spanish descent, according to demographic data.

The case inflamed passions over illegal immigration after then-President Donald Trump said Bahena Rivera had exploited lax immigration laws (https://apnews.com/article/immigration-north-america-donald-trump-us-news-ap-top-news-4437b62149d94adfb2bf7eb9593c688b) to enter the U.S. from Mexico as a teen