A Central Florida woman has been handing out blankets to the homeless since she was nine years old. Now, in college, Nikki Kingsland says she has collected some 50,000 blankets through the years, which are distributed to those in need over the holidays.

OVIEDO, Fla. - A Central Florida woman has been handing out blankets to the homeless since she was nine years old. Now, she’s in college and looking for someone to continue her efforts.  Nikki Kingsland’s big idea came back in the third grade.

“I went home and told my mom: This is what I want to do. I want to collect blankets for the homeless and hand them out. And she was like, ‘You’re crazy,’” Kingsland recalled.

She kept asking and then the family decided to give it a try. Fast-forward, the now first-year college student says they have collected around 50,000 blankets for people in the Orlando area, handing them out during the holidays.

“It’s a little bit bigger than I think people realize,” she explained.

The News Station has followed Nikki’s efforts for years. In our last report, she was looking for someone to take over because of school. 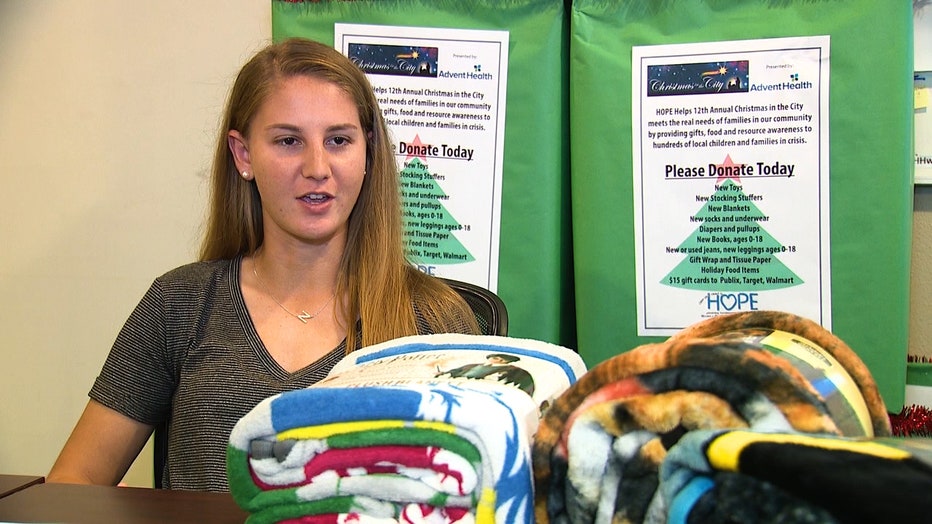 “We definitely want to keep that going so that’s going to be one of the collection items for this event,” said Joan Faulkner, CEO of HOPE Helps.

HOPE Helps already collects items for those in need before Christmas. Now, they’re adding blankets to that list.

“I don’t think we’ll ever get rid of the name,” Faulkner said. “We’ll always refer to it as the ‘Nikki’s Blankets’ section.”

What’s donated will be handed out at their Christmas In the City event. Last year, Kingsland was honored there.

“To know that this is something that’s going to be continued is really, really important,” Kingsland said.

To learn more about HOPE Helps and their holiday event, click here: https://www.hopehelps.org/