PINELLAS PARK, Fla. - Through a trembled voice, Pinellas Park Police Officer Will McCullough honored his fallen K-9 Luuk Tuesday, a dog he says he’d spent the best part of his career alongside.

"It was that bond," McCullough said. "I would attribute it to… more so than a family member. The amount of time we spend together and the amount of things we go through."

All of those memories memorialized at Curlew Hills Memory Gardens, during the 7th annual K-9 funeral service. The cemetery donates burial plots in the pet cemetery to all service animals in area-law enforcement agencies. Without this donation, the handler would typically pay out of his own pocket for the burial of the animal upon his death.

"It’s not only honoring the handlers who work these dogs every day, but also honoring these dogs that work so hard for us throughout the day and night," said Sargeant Mike Kilian, who leads the Pinellas County Sheriff’s Office K-9 Unit. He says most of the dogs pass away after retirement – which is why they’re usually off the force by age 7. 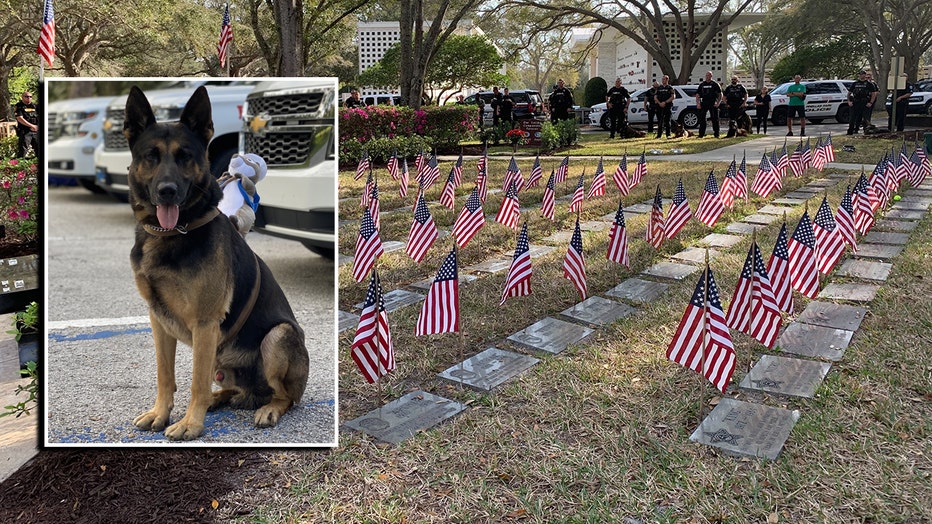 "We like to give them a little bit of time after retirement, to just be dogs," Kilian said. "To enjoy themselves and actually jump on furniture, eat some human food – have some pizza once in a while!"

Luuk was well on his way to enjoying those golden years when he was diagnosed with stomach cancer.

"And they did attempt to do a surgery, but it was ultimately unsuccessful," McCullough said.

He believes its ceremonies like this that provide closure.

"It gives you and opportunity to come and speak to your partner," he said.

Partners Kilian says, that are just as important to the force as any human.

"Whether it’s a bomb dog, a patrol dog, or a dual-purpose dog, they are working all night long and all day long," he said. "People don’t realize how hard these dogs work – for no paycheck."

But you can’t put a price on this kind of loyalty, and love.