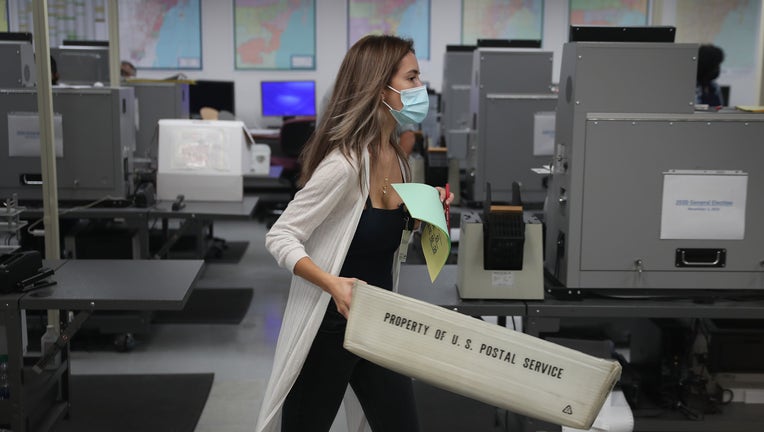 MIAMI-DADE COUNTY, Fla. - A Post Office in Florida’s largest county is inundated with a mail backlog, which could reportedly contain ballots.

The Minority Leader of the Florida House of Representatives, Kionne Mcghee, posted undated footage to his Twitter account on Friday that allegedly showed USPS Inspection Service officials arriving at a Florida Post Office location in Miami-Dade County to look into a massive mail pile-up, which is said to include mail-in ballots.

One local resident told McGhee he or she hadn’t received mail in five days, while a source told McGhee that sorting was expected to go on past Tuesday.

Rep. Debbie Mucarsel-Powell, D-Fla., who represents the area said in a statement on Friday said she has contacted relevant authorities.

“I am aware of the concerning situation involving backed-up mail, including election mail, at the Post Office in Princeton,” Mucarsel-Powell said. “Earlier today, I inspected this facility and took immediate action to contact the US Postal Service and the USPS Office of the Inspector General. I have requested an immediate briefing from the Postmaster General. I am working to ensure that mail delays do not impact participation in this election."

A spokesperson for the Miami-Dade County Elections Departments also told our local Fox affiliate USPS has assured them that "all ballots will be delivered timely."

The Miami Herald reported that the issue is being looked into, alongside potential remedies to ensure the office is caught up on delivery before Election Day.

According to information from the state, the last day for a Supervisor of Elections is be able to mail out a ballot is 8 days before the election.

The ballot must be returned by 7 p.m. ET on Nov. 3 in order to be counted.

A voter who has requested a ballot may change his or her mind and vote in person.

President Trump defeated Democratic challenger Hillary Clinton by a margin of 1.2% in the 2016 election, though there is speculation that this year’s race could be tighter.

Early indications show that Democrats are turning out in lower rates than expected in Miami-Dade – the largest county in the state.