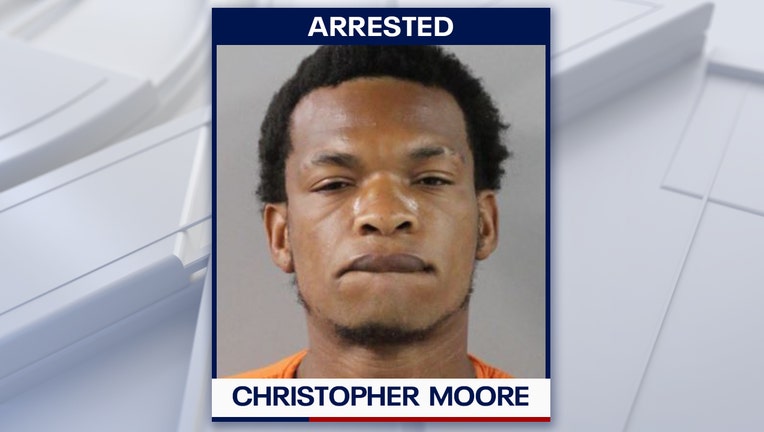 BARTOW, Fla. - Polk County deputies arrested a man accused of stealing a backpack from the victim of a fatal motorcycle crash in Bartow.

According to the sheriff's office, the crash happened around 6 p.m. Monday at the intersection of State Road 60 and Old Connersville Road in unincorporated Bartow.

The group had just left the Connersville Bait and Tackle when deputies said the car crossed the eastbound lanes of SR 60 and drove into the path of a 2016 Suzuki 600 motorcycle, driven by 21-year-old Blake Gilmore of Winter Haven.

Gilmore was ejected from his motorcycle and pronounced deceased at the scene. The sheriff's office said he was wearing a helmet at the time of the crash.

Young was transported to the hospital for minor injuries, while Moore and Spurlock were not injured.

When Polk deputies arrived at the scene, they said they found Moore and Spurlock walking away from the crash.

Investigators said Moore was carrying a backpack that belonged to Gilmore, the crash victim. When questioned, Moore admitted to deputies that he stole the backpack from the scene of the accident, the sheriff's office said.

Deputies arrested Moore for petit theft, a misdemeanor, and tampering with evidence, a felony. He was taken to the Polk County Jail and was being held on a $1,500 bond.

The cause of the crash remains under investigation.